BANGKOK - Self-exiled members of the Cambodian opposition who announced plans to return this week have been thwarted in their journeys by the Thai and Malaysian governments.

Ms Mu Sochua, vice-president of now-dissolved Cambodia National Rescue Party (CNRP), was detained by immigration officials at Kuala Lumpur international airport at around midnight on Wednesday (Nov 6), two weeks after she was turned away at Thailand's Suvarnabhumi airport.

CNRP co-founder Sam Rainsy was blocked in Paris on Thursday from boarding a plane destined for Thailand, from where he had hoped to return home.

Thai Premier Prayut Chan-o-cha has publicly rejected Rainsy's request for safe overland passage, saying that he would be denied entry into Thailand.

The actions have triggered condemnation from human rights groups, who argue that Bangkok and Putrajaya should not be suppressing political opposition on Phnom Penh's behalf.

CNRP, which won 44.5 per cent of votes in Cambodia's 2013 general election, was dissolved in 2017 following the arrest of its president Kem Sokha for attempting to overthrow the government. A year later, Prime Minister Hun Sen's Cambodian People's Party won a clean sweep of all the seats in Parliament.

Phnom Penh accuses them of fomenting a coup and has reportedly notified neighbouring countries of its arrest warrants for Rainsy, Ms Sochua and seven other CNRP leaders.

After arriving in Kuala Lumpur on a flight from Jakarta at around midnight on Wednesday, Ms Sochua was detained by immigration officials on unspecified grounds. 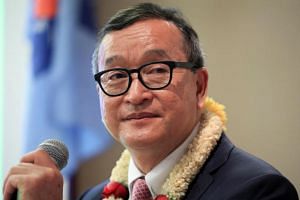 She, along with two other Cambodian activists, were released on Thursday night, according to Malaysian human rights commissioner Jerald Joseph.

"She has travelled here on a United States passport," he told The Straits Times on Thursday. "She may be of Cambodian origin but she travels as a citizen of another country… She should not be denied entry."

"Our principle, in Asean in particular, generally is that we don't interfere in the internal affairs of other countries," he told reporters on Thursday.

"We do not want to let them use Malaysia as a base for struggle in other countries. We wanted to deport her... now we are trying to find any country that can take her."

Tun Dr Mahathir's words echoed those of Thai PM Prayut, who told reporters on Wednesday: "According to our commitment to Asean, we will not interfere in each other's internal affairs, and we will not allow an anti-government person to use Thailand for activism."

He added that Rainsy "probably won't get in".

Speaking from Paris, Rainsy said he "will never give up", adding that he would seek "an alternative flight to be able to leave for Thailand today".

"They are not coming here in the name of political activities or the opposition, they come here to create chaos," he told The Straits Times. "We will take action to protect national security. We will protect our Constitution."

The CNRP leaders had previously said they would enter Cambodia via its land border with Thailand. According to local Cambodian media, posters of the exiled CNRP leaders have been placed at the Thai-Cambodian border crossings.

Former finance minister Rainsy, a long-time nemesis of Mr Hun Sen, fled Cambodia for France in 2015, before he was convicted of defaming Mr Hun Sen. From Paris, he has kept up his attacks on Mr Hun Sen.

In response to Mr Prayut's denial of access to Thailand, Rainsy told Radio Free Asia: "We have already committed that we will arrive Cambodia to rescue Cambodian people. So there are many ways and solutions. We will find one to enter Cambodia."

Meanwhile, the Asean Parliamentarians for Human Rights (APHR) has called for an immediate and unconditional release of Ms Sochua.

"It is outrageous that Malaysia and other Asean countries are doing the dirty bidding of their counterparts fearful of legitimate political opposition," said APHR board member Kasit Piromya, who is also a former foreign minister of Thailand.