BRUSSELS (AFP) - The two brothers who blew themselves up in the deadly train and airport attacks in Brussels were known by police for serious crimes and are linked to November's Paris massacre.

Khalid, 27, who blew himself up on Tuesday at the Maalbeek metro station, is a convicted car-jacker.

His brother Ibrahim, 30, who was one of two suicide bombers at the airport, had been handed a nine-year sentence for firing his gun at police, local media say.

The pair entered the public eye on March 15 when police raided an apartment in the Forest district of Brussels, as part of the investigation into the Paris attacks.

Belgian media reports said a joint squad of Belgian and French police approached the property because it was rented under a false name used by Khalid to secure a hideout months earlier for the Paris attackers.

Khalid is suspected of having rented other properties used to prepare the November tragedy in Paris, including one in the city of Charleroi from where ringleader Abdelhamid Abaaoud set off to lead the assault in the French capital. 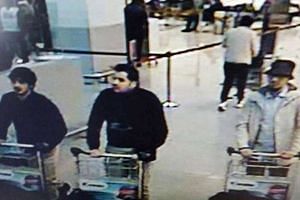 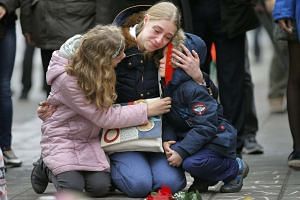 The police last week fully expected to find an abandoned property as utilities in the Brussels apartment had been shut off for weeks.

Instead they came under heavy gunfire, with one assailant killed and two men fleeing - including, it is thought, Salah Abdeslam, the top Paris fugitive who would be arrested three days later.

The brothers are not believed to have been present in those events, but their connection to Islamic State jihadism was established.

Khalid in 2011 received a five-year sentence for car-jacking, according to daily La Derniere Heure.

Ibrahim meanwhile in 2010 was handed a nine-year sentence for firing at police with a Kalashnikov assault rifle during a botched robbery, it said.

Another possible participant in the Brussels attack is suspected IS terrorist Najim Laachraoui, that reports said could be the man dressed in a light jacket seen in CCTV images at the airport.

Moroccan-born Laachraoui is suspected of being the bomb-maker for the Paris attacks that killed 130 people.

Traces of Laachraoui's DNA were found on explosives used in the Paris bomb and gun assaults, including at the Bataclan rock venue where 80 people died.

His traces were also found in a rural Belgian hideout used on the eve of the Paris attacks as well as in a suspected bomb factory in the Schaerbeek district of Brussels.

Laachraoui grew up in the multi-cultural Schaerbeek neighbourhood and has been wanted by police in connection with the Paris attacks since December 4, though by a false identity that was only unmasked last week.

Laachraoui attended Schaerbeek's Sainte-Famille Catholic school for six years where a school official told AFP he was a "typical" student. He received his baccalaureat, the equivalent of a high-school diploma, there in 2009.

A newsletter posted on the school's website indicated that he studied electronics, but the official would not confirm this.

Laachraoui left for Syria in September 2013 in one of the first waves of jihadists to leave Belgium for Syria, where he fought under the Islamic State nom de guerre Abu Idriss, according to media reports.

In February, a Belgian court convicted Laachraoui in absentia for his involvement with IS.

He is known to have returned to Europe in September when he was controlled by police under a false identity in a Mercedes driven by Abdeslam, who now sits behind bars in Belgium.

Also in the car was the Algerian Mohamed Belkaid, 35, who was shot dead during the March 15 search and gun battle in Brussels that led to Abdeslam's capture.