LONDON (BLOOMBERG) - Prime Minister Theresa May is promising to reopen Brexit talks with the European Union on a future customs deal in an attempt to breathe life back into stalled negotiations with the Britain's main opposition Labour Party.

May's office said Sunday (May 12) that the government will explore with the EU this week how to rewrite the outline political agreement on the future partnership between the United Kingdom and the bloc. She wants to strike a deal on a joint blueprint for Brexit with Jeremy Corbyn's Labour Party in order to take Britain out of the bloc before the summer, according to the statement.

The premier is under mounting pressure over her failure to complete the UK's divorce from the 28-country trade bloc, with a growing number of politicians in her Conservative Party believing she has failed and must resign.

The EU has said it is willing to make changes to the political declaration - the non-binding part of the Brexit deal that focuses on future ties. It has refused to reopen the divorce deal itself, which includes the controversial Irish border backstop. The UK government is not asking to renegotiate that part.

How Could May Get a Brexit Deal Past Parliament? You Do the Math

May appealed to Corbyn for help after Parliament voted to reject the deal she negotiated with the EU three times. Her officials have been in talks with Labour for the past month without reaching a unified position.

On Sunday, Labour's chief Brexit spokesman, Keir Starmer, said his party would be unlikely to give wholehearted backing to any plan that does not include another referendum to ratify public support for the deal. 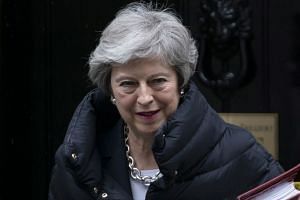 PM Theresa May has already set out timetable for her departure, says UK minister

"A significant number of Labour MPs, probably 120 if not 150, would not back a deal if it hasn't got a confirmatory vote," he told the Guardian newspaper.

May is battling to get a Brexit deal approved by Parliament, and has said she will step down once a deal is reached.

A full meeting is scheduled for Monday involving Labour officials and the senior government negotiating team - including May's de facto deputy David Lidington and her chief of staff Gavin Barwell. They are due to bring together all the work and proposals on the table, May's officials said.

In the coming days, the government will explore with the EU when talks could reopen on making changes to the political declaration on future ties. This would be to discuss possible revisions to the text to take account of any deal May's team reaches with Labour - specifically on customs arrangements, environmental protections and workers' rights.

Corbyn wants a full, permanent customs union between Britain and the EU after Brexit to protect trade and prevent cumbersome checks on goods crossing the border. May had ruled this out, arguing that it would prevent the UK from striking free-trade deals with non-EU countries - a key goal of pro-Brexit campaigners in her Conservative Party.

Now, the government is considering compromise options for a customs union, including a temporary arrangement to last until the next general election, which is scheduled to take place in 2022.