LONDON - Prime Minister Theresa May will return to Parliament on Tuesday (Jan 29) to face a House of Commons trying to wrest control of Brexit from her, as the clock ticks down toward Britain's departure from the European Union in just 60 days.

Members of Parliament, frustrated by the inability of the prime minister to win approval for her withdrawal agreement, are ready to debate and vote on cross-party amendments designed to steer the government one way or another on Brexit.

May's initial deal was crushed by a humiliating defeat in Parliament two weeks ago, and she survived a subsequent no-confidence challenge on a party-line vote.

The famously dogged - or obstinate - May appeared to be out of fresh ideas when she returned to the House of Commons last week with a "plan B" that sounded a lot like a warmed-over plan A.

Meanwhile, Parliament remains gripped by deadlock, without a clear majority on how to exit the European Union after four decades of free trade and shared governing.

The flamboyant, sharp-tongued speaker of the House of Commons, John Bercow, has upended tradition by allowing a raft of possible amendments to be debated - leading his critics to charge that the speaker is trying to help backbench renegades foil Brexit by taking control away from the government.

One of the most popular amendments likely to be considered on Tuesday, written by two backbenchers from opposing parties, seeks to give May until the end of February to secure a deal with Brussels that could pass through Parliament. If the the prime minister fails again, then the chamber wants her to seek permission from EU leaders to delay Brexit beyond the scheduled departure date of March 29. 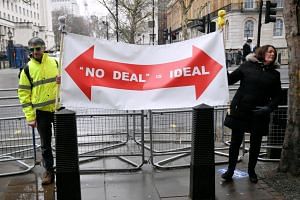 There is disagreement over whether such a delay should be a few months long or until the end of 2019, as the amendment proposes.

Another amendment seeks to stop May's government from allowing Britain to leave the EU in two months with no deal at all.

The no-deal scenario is unpopular among many members of Parliament, but it remains a possibility. Governments and businesses in Britain and across Europe are preparing to spend billions in contingency plans.

Richard Harrington, an undersecretary for industry and energy, told a gathering in London that a no-deal Brexit would be "a total disaster for the economy". "I am very happy to be public about it and very happy if the prime minister decides I am not the right person to do the business industry job," he said, essentially daring May to sack him.

Yet some hardcore Brexiteers support leaving the European trading bloc with no deal, because of their extreme dislike of May's approach, which seeks to keep Britain closely tied to European rules.

Many ordinary citizens who support Brexit are telling pollsters the same thing, that they are sick and tired of the endless dithering and just want out.

Andrea Leadsom, the Tory leader of the House, told The Sunday Times that "taking no deal off the table has been used as a thinly veiled attempt to stop Brexit". Recent days have seen British business leaders warn that a no-deal scenario poses real risks to the economy.

The British Retail Consortium, including major grocery store chains, warned Parliament that it is reliant on fresh produce from growers in the European Union - and that it would be impossible to stockpile greens and fruits if Britain leaves the trading bloc with no deal. "We are extremely concerned that our customers will be among the first to experience the realities of a no deal Brexit," the association said in a letter reported by the BBC.

Airbus CEO Tom Enders said last week, "Please don't listen to the Brexiteers' madness, which asserts that 'because we have huge plants here, we will not move and we will always be here.' They are wrong." Airbus employs 14,000 people in Britain, manufacturing airplane wings. "It is a disgrace that, more than two years after the result of the 2016 referendum, businesses are still unable to plan properly for the future," Enders said.

His remarks came as the company that assembles Jaguars and Land Rovers, Britain's biggest carmaker, said it would extend its annual spring assembly-line stoppage for an extra week because of Brexit uncertainties.

Facing such dour warnings from British business, May will likely try to convince Parliament to allow her to return to Brussels one more time to try to strike a better deal.

In a briefing with reporters on Monday at 10 Downing Street, May's official spokesperson, who goes unnamed according to protocol, said that prime minister wants two more weeks to try to change the withdrawal agreement she spent two years negotiating in Brussels. Another vote on her new Brexit deal, if she can strike one, would be held Feb 14.

The most contentious section of the current, failed agreement involves the legally binding guarantee, the so-called backstop, which is designed to prevent a hard border between Northern Ireland and Ireland - essentially between the Britain and the EU - after Brexit.

The Irish border backstop requires Britain to remain closely aligned with EU rules and customs arrangements if it is unable in the future to agree on a new free-trade deal with the bloc.

Critics say it could keep Britain in the EU forever.

Boris Johnson, an arch Brexiteer and former foreign secretary who has argued that Britain should have the courage to leave with no deal said if May were able to secure a "freedom clause" from Brussels that would make the backstop time-limited or allow Britain to leave on its own, without permission from the EU, she would win the "full-throated" approval of the entire nation, Johnson wrote in his weekly column in The Daily Telegraph.

That wouldn't be easy.

As British reporters were being briefed at 10 Downing, Margaritis Schinas, the European Commission spokesman, told journalists in Brussels that the current withdrawal agreement now on the table has the unanimous backing of the leaders of the 27 nations remaining in the European Union. "It is endorsed by leaders and is not open for renegotiation," Schinas said.

European Commission Vice President Jyrki Katainen said it would be "a stupid thing" for the EU to make further concessions that would put the remaining 27 members at a disadvantage.