LONDON - British lawmakers voted on Thursday night (March 14) to allow the government to seek a delay for Britain’s departure from the European Union.

Britain will now, almost certainly, not leave the bloc as initially scheduled on March 29.

British Prime Minister Theresa May will request an extension to the Brexit negotiation period known as Article 50 when she attends a European Council meeting on March 21.

However, the extension is not automatic, an EU Commission spokesman reiterated – all 27 of the remaining EU member states must unanimously approve it.

The legal default date for Britain to leave the EU is still March 29 if there is no agreement.

Mrs May’s spokesman said the government was still making preparations in the event of a no-deal divorce.

Lawmakers had overwhelmingly supported Thursday’s government motion by 412 to 202 votes.

The motion offered two options – the first is a short delay until June 30 if members of parliament back her existing deal in a third meaningful vote, likely to take place next week; the second is for a much longer extension to allow time to for an alternative Brexit approach.

The longer extension will mean that Britain must also participate in the upcoming European Parliament elections.

The lengthy delay also risks Brexit not materialising at all. 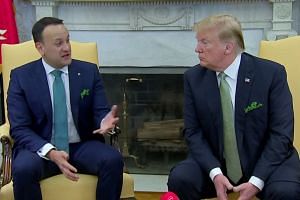 Trump slams handling of Brexit by British PM Theresa May

Earlier on Thursday, MPs also voted down an attempt to hold another referendum on EU membership, by 334 votes to 85.

Labour Party MPs abstained from the vote, arguing that now was not the right time to push for a public vote.

After the votes, however, opposition leader Jeremy Corbyn addressed the House, reiterating his support for another referendum. He said: “Today I reiterate my conviction that a deal can be agreed based on our alternative plan that can command support across the House.

“I also reiterate our support for a People’s Vote – not as a political point-scoring exercise but as a realistic option to break the deadlock.”

With just 14 days before Britain is due to leave the EU, Mrs May seems to be clinging on to her waning authority by a thread, after a series of humiliating defeats.

Using a threat of a lengthy extension to Article 50, she has made clear her negotiated divorce deal is still on the table and seeks to push rebel lawmakers into supporting it, despite having had it rejected twice – in January by a historic margin, and again on Tuesday.

Mrs May will need to convince Brexit supporters in her Conservative Party, as well as members of the Democratic Unionists party, the small Northern Irish party that props up her minority government in parliament, to back her deal ahead of next week’s meaningful vote if a short delay is to be put in place.

After a highly volatile week for the pound during which it hit a nine-month high, rising from below US$1.30 to a high of almost US$1.34 as investors bet Britain would avoid a no-deal Brexit, a Reuters report said.

Trading on Thursday, however, remained relatively calm, the report added.