LONDON (REUTERS) - British foreign minister Boris Johnson showed little sign of softening his tough stance on Brexit in a speech on Wednesday (Feb 14) that was intended to soothe the concerns among pro-European Union voters about the economic impact leaving the bloc.

Johnson is among those pushing for a harder Brexit, which would move Britain away from EU rules, and he said on Wednesday the country should be allowed to take a different approach to regulation in areas such as financial services and medical technology.

But Prime Minister Theresa May’s Conservative government, like the country, remains deeply split on the issue as the clock ticks towards the formal exit date, March 29, 2019.

In the first of a series of speeches by government ministers meant to flesh out such a vision, Johnson said the benefits of being in the EU’s single market and customs union were “nothing like as conspicuous or irrefutable” as their supporters argue.

But business leaders said Johnson’s speech failed to spell out Britain’s future relationship with the 27 other members of the EU, which is by far its biggest trade partner.

Johnson, one of the leaders of the “Leave” campaign in the 2016 referendum, said Brexit was about democracy, not hostility towards the rest of Europe, adding that Britain would remain open to immigration after it leaves the EU.

“It’s not some great V-sign from the cliffs of Dover,” he said, referring to a rude British hand gesture. “It is the expression of a legitimate and natural desire to self-govern of the people, by the people, for the people.”

Some in May’s government, including finance minister Philip Hammond, favour a “soft Brexit” in which Britain stays as closely aligned as possible to the bloc to minimise disruption to the economy. Hammond and May voted to stay in the EU.

“Businesses are becoming increasingly worried at the lack of detail coming from government, and this speech (by Johnson) does not make its plan any clearer,” said Stephen Phipson, head of EEF, a manufacturing industry group. 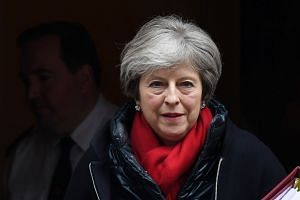 Johnson said it would be “mad” to end up with a settlement that does not allow Britain to enjoy the economic freedoms of leaving the EU, though he said he was happy for Britain to remain subject to EU law during a planned transition period after March 2019, to give businesses greater certainty.

It remains to be seen which side of the debate May will eventually back. She is due to meet German Chancellor Angela Merkel on Friday as Britain and the rest of the EU try to agree on the terms of a transition deal to smooth Britain’s exit.

In a sign of how prickly relations across the English Channel remain, European Commission President Jean-Claude Juncker denied he wanted a “European super-state” after Johnson said Brexit was an opportunity to reject what he called the EU’s desire to create an overarching European state.

He also used his speech to reject the notion that Brexit would result in Britain becoming more insular.

He said Britons would continue to retire to Spain, students would still go on foreign exchanges to Europe and countries such as the United States were increasing exports to the EU twice as quickly as Britain, despite being outside its membership.