LONDON (NYTIMES) – Britain’s defence secretary, Michael Fallon, has resigned over allegations about his past conduct, amid a growing outcry over claims of sexual harassment or inappropriate behavior by British politicians.

Fallon’s departure from his ministerial post was announced by the office of Prime Minister Theresa May, which released a formal letter of resignation on Wednesday night. “A number of allegations have surfaced about MPs in recent days, including some about my previous conduct,” wrote Fallon, referring to members of Parliament.

“Many of these have been false but I accept in the past I have fallen below the high standards that we require of the Armed Forces that I have the honor to represent,” Fallon said, adding that he had “reflected on my position and I am therefore resigning as Defence Secretary.”

In response May said she appreciated the “characteristically serious manner” in which Fallon had considered his position and paid tribute to “a long and impressive ministerial career – serving in four departments of State under four prime ministers”. Fallon had served as defence secretary since July 2014 and has not resigned his seat as a lawmaker.

Earlier this week he admitted that he had put his hand on the knee of a female journalist, Julia Hartley-Brewer, in 2002. She has accepted his apology, and made light of the incident in recent days, posting a picture of her knees on Twitter, and writing that they were still intact. 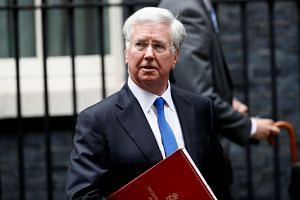 On Wednesday night, Hartley-Brewer reacted with surprise at the resignation, but added: “I doubt that my knee was the reason.”

Some British political journalists, including ITV’s political editor, Robert Peston, reported that Fallon may have quit because he feared that other, similar accusations might come to light.

Asked whether he feared more might emerge, Fallon told the BBC on Wednesday: “The culture has changed over the years. What might have been acceptable 15, 10 years ago is clearly not acceptable now. Parliament now has to look at itself.”

Fallon’s resignation is a setback to May, who will lose from her top ministerial team one of its most reliable media performers as negotiations on Britain’s withdrawal from the European Union are making little progress.

It could also force her to reshuffle her Cabinet sooner than expected, a politically difficult move, although she may opt for a minimalist reorganisation of her top team. No replacement for Fallon was announced on Wednesday night (Thursday morning Singapore time).

Worse for May, this might not be the last such resignation. An investigation has been opened into the behaviour of another minister, Mark Garnier, after he admitted that he had asked a female member of his staff to buy sex toys.

In the aftermath of the allegations of sexual harassment and rape against the American movie producer Harvey Weinstein, many additional complaints are coming to light and a list of more than 30 lawmakers from May’s Conservative Party who are said to have behaved inappropriately has been circulating online, with names redacted. The claims vary from serious allegations of sexual harassment to indiscretions like marital infidelities.

But like the world of entertainment, politics is a profession in which senior individuals, mainly men, have considerable power over those trying to establish a career. And even some less serious allegations suggest an unacceptable degree of sexism or complacency about inappropriate behavior within the British Parliament.

On Saturday Michael Gove, the environment secretary, prompted angry complaints after joking that being interviewed by the BBC presenter John Humphrys was like entering Weinstein’s bedroom and hoping “you emerge with your dignity intact.” Gove issued an unreserved apology.

Meanwhile, the former work and pensions secretary, Stephen Crabb, has apologized for “sexual chatter” with a 19-year-old who applied for a job in his office.

The opposition Labour Party has been implicated too. A Labour activist, Bex Bailey, told the BBC that she suffered a serious sexual assault at a party in 2011 and that, when she later asked for advice from a senior staff member, she was advised that formally reporting what had occurred could damage her career prospects.

Last week Labour also suspended one of its lawmakers, Jared O’Mara, while it investigates allegations that he made a series of misogynistic and homophobic comments.

Some lawmakers have denied accusations made against them, including Damian Green, one of May’s closest allies, who has described allegations of inappropriate behavior toward a female activist as completely false.