LONDON - Passengers aboard a British Airways flight from London to Dusseldorf on Monday (March 25) got a surprise when their plane landed in Edinburgh instead of the German city.

The passengers were unaware of the mix-up until the plane landed and the pilot welcomed them to Edinburgh, BBC reported.

The flight was being operated by German firm WDL through a leasing deal and the unwanted diversion appears to have been caused by an incorrect flight plan being filed.

It was unclear how many people were on board the plane. One passenger, management consultant Sophie Cook, 24, said that when the pilot made the announcement, everyone assumed it was a joke.

"The pilot said he had no idea how it had happened. He said it had never happened before and that the crew was trying to work out what we could do," said Ms Cook, who travels from London to Dusseldorf each week for work.

Subsequently, the plane sat for 2-1/2 hours on the tarmac in the Scottish airport.

"It became very frustrating. The toilets were blocked and they ran out of snacks. It was also really stuffy," said Ms Cook. 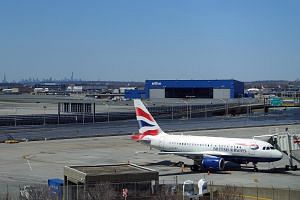 British Airways to pay out compensation after 380,000 customers hit in cyber attack

Some passengers took to Twitter to voice their frustration. "@British_Airways can you please explain how can my morning flight taking off from LCY to Dusseldorf land in Edinburgh. While an interesting concept, I don't think anyone on board has signed up for this mystery travel lottery," wrote user Son Tran.

In its reply, British Airways said it did not "currently have any information" as to why the flight had flown elsewhere.

Eventually, the flight did make it to Dusseldorf. Ms Cook said that when the pilot asked passengers to raise their hands if they wanted to go to Dusseldorf, everyone raised their hands.

In a statement, British Airways said: "We have apologised to customers for this interruption to their journey and will be contacting them all individually."

The airline said once the flight flew into Dusseldorf, its customer service team met all the passengers, and would also be following up with them "in due course".

It said that the pilot had not become lost at any point during the flight, but because the paperwork said the flight was to Edinburgh, that was the route the plane took.

It also said it was working with WDL to find out how the mix-up happened, BBC reported.

WDL said it was "working closely with the authorities to investigate how the obviously unfortunate mix-up of flight schedules could occur".

"At no time has the safety of passengers been compromised. We flew the passengers on the flight with number BA3271 to Dusseldorf after the involuntary stopover in Edinburgh," it said.