LONDON (BLOOMBERG/AFP) - The UK Electoral Commission said it will visit the offices of Nigel Farage's Brexit Party to review how it raises money after former Prime Minister Gordon Brown called for an investigation.

The party leads polling ahead of Thursday's (May 23) European elections as it attracts voters disgruntled at the failure of the mainstream parties to deliver Brexit. While the party says it complies with electoral law, Brown said its funding must be probed by the elections watchdog.

"We are attending the Brexit Party's office tomorrow to conduct a review of the systems it has in place to receive funds, including donations over 500 pounds (S$875) that have to be from the UK only," the Commission said in a statement on Monday. "If there's evidence that the law may have been broken, we will consider that in line with our Enforcement Policy." Brexit Party Chairman Richard Tice earlier told BBC radio the party complies with electoral law and it is "ridiculous" to say it has unexplained funding.

Tice said the party has taken donations of 25 pounds from more than 100,000 people. Asked repeatedly whether it takes donations in foreign currency, he declined to reply yes or no, saying "as I understand that's not illegal."

Farage - his black suit covered from shoulder to toe - being led away by a bodyguard during a campaign stop in the northern city of Newcastle. The suspected culprit told the Press Association it was a 5.25 pound banana and salted caramel shake he bought at the local Five Guys hamburger chain store. "I didn't know he was in town. I thought this is my only chance," the 32-year-old was quoted as saying before being detained by the police. First-time offenders in such cases usually pay a small fine. In a tweet,

Farage blamed the incident on EU supporters who "have become radicalised, to the extent that normal campaigning is becoming impossible". The European Parliament election campaign has turned into a test of Britons' support for Brexit three years after they first narrowly voted to leave the bloc. 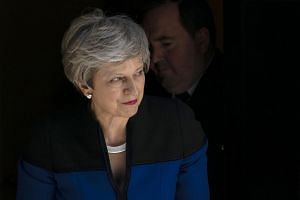 Farage's Brexit Party is leading the polls on its promise to get Britain out quickly and by any means.

The Remain camp's milkshake resistance meanwhile has also targeted a far-right leader who is best known by his online alias Tommy Robinson - an adviser to UKIP who once headed the now-banned English Defence League. A clip that went viral this month showed a young man of Asian descent splashing Robinson in the face with a McDonald's drink in response to something the far-right leader said. Robinson fought back by landing a few punches at the man before being restrained.

Meanwhile UKIP European Parliament candidate Carl Benjamin - known by his social media pseudonym Sargon of Akkad - has been "milkshaked" at least four times this month. A defiant Benjamin showed up to one of his events this week with a McDonald's cup in his hand. - #Justsaying- The entire mess prompted McDonald's to temporarily halt milkshake sales near the site of a campaign event Farage held last week.

"We will not be selling milkshakes or ice cream tonight," a sign taped to the door of the fast food chain's central Edinburgh restaurant said. "This is due to a police request given recent events." That decision elicited a controversial comeback from the US chain's eternal rival Burger King. "Dear people of Scotland," the @BurgerKingUK account wrote on Saturday. "We're selling milkshakes all weekend. Have fun. Love BK."

It signed the post with the #justsaying hashtag. A flurry of angry comments on Twitter prompted the account to later add: "We'd never endorse violence - or wasting our delicious milkshakes!" A spokesman for Theresa May said on a more sombre note that the premier "has been clear that politicians should be able to go about their work and campaign without harassment, intimidation, or abuse".