"Above all, I cannot reconcile the terms of the proposed deal with the promises we made to the country in our manifesto at the last election," Raab said.

"This is, at its heart, a matter of public trust," Raab said. "I cannot support the proposed deal."

Britain’s work and pensions minister Esther McVey also quit May’s cabinet, the second senior minister to resign on Thursday after Raab. “The deal you put before the Cabinet yesterday does not honour the result of the referendum”, McVey wrote in a letter to May.

McVey said that the withdrawal agreement was not what Britons voted for when they chose to leave the EU in 2016. “It will be no good trying to pretend to (Britons) that this deal honours the result of the referendum when it is obvious to everyone it doesn’t,” she wrote.

“The proposals put before Cabinet, which will soon be judged by the entire country, means handing over around 39 billion pounds to the EU without anything in return... We have gone from no deal is better than a bad deal, to any deal is better than no deal.”

The ministerial resignations thrust the United Kingdom into a political crisis just as May was attempting to garner support for a Brexit deal which her opponents have warned could sink her premiership. 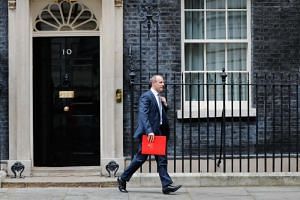 How does a leadership challenge to a Conservative British prime minister work?

Confused about Brexit? Here's a guide as the endgame begins

It also throws the future course of Brexit into uncertainty: scenarios range from a calm divorce to rejection of May's deal, potentially ending her premiership and leaving the bloc with no agreement, or another referendum.

Raab said May's plan threatened the integrity of the United Kingdom and he could not support an indefinite backstop arrangement where the EU held a veto over Britain's ability to exit.

"No democratic nation has ever signed up to be bound by such an extensive regime, imposed externally without any democratic control over the laws to be applied, nor the ability to decide to exit the arrangement," Raab said in his resignation letter.

The 44-year-old was appointed to the role of Brexit minister in July this year following the resignation of his predecessor David Davis, who also quit in protest at May's Brexit strategy.

European Union leaders will meet on Nov 25 to endorse the divorce deal.

British journalists said anger among Brexit-supporting Conservative lawmakers was so high that they might call for a vote of no confidence in May's leadership. There was no confirmation.

ITV reporter Robert Peston said enough demands for a no confidence vote could be lodged by lunchtime on Thursday.

Separately, a British Conservative lawmaker said she believed that the threshold had been reached to trigger a vote of no confidence in the prime minister.

A challenge to May is triggered if 15 per cent of the parliamentary party, or 48 lawmakers, write letters demanding a confidence vote to the chairman of the party's "1922 Committee", which represents lawmakers who have no government jobs.

Lawmaker Anne Marie Morris told the BBC on Thursday that she believed that the chairman, Graham Brady, had that number of letters.

"Now the one thing which is going to be a bit of a challenge is some of the letters have gone in on a conditional basis. MPs have said you can use this letter but only when I say so," Morris said.

The pound plunged against both the euro and the dollar on Thursday after Raab made the announcement.

His resignation fuelled a sell-off in the British currency which was already struggling to gain traction after Mrs May said on Wednesday she had won over her divided cabinet following a five-hour meeting.