LONDON (REUTERS) – The British government has told airlines it will introduce a 14-day quarantine period for most people arriving from abroad to try to avoid a second peak of the coronavirus outbreak, an association representing the airlines said on Saturday (May 9).

Airlines UK, which represents British Airways, easyJet and other UK carriers, said the move required “a credible exit plan” and should be reviewed weekly.

Airport operators said it could have a “devastating” impact on the aviation industry and the broader economy.

The quarantine plan was first reported by The Times newspaper, which said Prime Minister Boris Johnson would announce on Sunday that passengers arriving at airports and ports, including Britons returning from abroad, would have to self-isolate for a fortnight.

Under measures that are likely to come into force in early June, travellers will have to provide the address at which they will self-isolate on arrival, The Times said.

“These measures will help protect the British public and reduce the transmission of the virus as we move into the next phase of our response,” The Times quoted a government source as saying.

At the government’s daily news briefing, transport minister Grant Shapps did not confirm the quarantine plans but said, with the UK infection rate down, “it clearly then makes sense to look at what happens at the borders”.

Ireland has had similar measures in place since last month.

Johnson is due to announce on Sunday the next steps in Britain’s battle to tackle the pandemic following a review by ministers of lockdown measures that have all but shut down the economy and kept millions at home for nearly seven weeks.

Airport operators said a quarantine would compound damage done by the virus to the aviation industry as it would put people off travelling when lockdown restrictions are lifted.

“Quarantine would not only have a devastating impact on the UK aviation industry, but also on the wider economy,” said Karen Dee, chief executive of the Airport Operators Association.

“If the government believes quarantine is medically necessary, then it should be applied on a selective basis following the science, there should be a clear exit strategy and the economic impact on key sectors should be mitigated.” 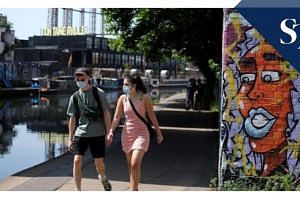 Airlines UK said it would seek assurances that the move is “led by the science” and that airlines would need support measures to ensure the aviation sector gets through the quarantine period.

Pilots union Balpa said it was concerned the commercial impact of a quarantine scheme had not been thought through by the government.

The Times report said travellers from Ireland, the Channel Islands and the Isle of Man would be exempt from the quarantine, as would lorry drivers bringing crucial supplies.

It said the authorities would carry out spot checks and those found to be breaking the rules would face fines or deportation.

Britain has reported 31,587 deaths from the coronavirus and Shapps said Johnson would not announce any dramatic changes to Britain’s lockdown on Sunday.

“We will have to proceed with an unbelievable degree of caution, we will not be able to go back to business as usual,”he said.