LONDON (NYTIMES) - Britain has evidence that Russia has been manufacturing and stockpiling the nerve agent used in an attack on a former Russian double agent on British soil, British Foreign Secretary Boris Johnson said Sunday (March 18).

Johnson said Russia had been actively researching the use of nerve agents for use in assassinations within the past decade.

The foreign secretary's statements, made in a BBC interview, came 12 days after the former spy, Sergei V. Skripal, and his daughter, Yulia Skripal, were found unconscious on a bench in the quiet city of Salisbury, in southwestern England, on March 4.

Prime Minister Theresa May of Britain announced the following week that the poison used in the attack was Novichok, a military-grade nerve agent developed by Soviet scientists for use on Nato troops.

The identification of Novichok as the weapon has become the linchpin of the British case for Russia's culpability in the poisoning.

Though one of the scientists who developed the nerve agent, Vil Mirzayanov, published its chemical structure and now lives in the United States, it is extremely dangerous to manufacture.

He said in an interview that the only laboratories known to have fine-tuned the process were in Russia and parts of the former Soviet Union.

Russian officials have strenuously argued against this point in recent days, suggesting at different times that the Skripals had not been attacked and that Britain was behind the attack.

In Moscow on Sunday, in his first extensive remarks about the poisoning, President Vladimir Putin called it "total rubbish, drivel and nonsense" to think that someone in Russia would carry out such "antics" so close to Russia's presidential election, which was Sunday, and the World Cup soccer tournament, which begins in June in Russia.

Putin said he first learned about the poisoning, which he called a "tragedy," from the news.

His initial reaction, he said, was that people would have died on the spot if it had really been a military-grade poison. He also denied that Russia had any such substance.

"We destroyed all of our chemical weapons under the control of international observers," Putin said, speaking at a late-night news conference to celebrate his election victory.

"Moreover, we were the first to do this, unlike some of our partners who promised to do this but have yet, unfortunately, to keep their pledge."

On Sunday morning, Russia's ambassador to the European Union, Vladimir Chizhov, suggested to a BBC reporter that Britain must have had samples of Novichok at its chemical weapons laboratory, Porton Down, near the site of the attack.

He suggested that would have been the only way for British authorities to identify the nerve agent so soon after Sergei Skripal and his daughter collapsed.

May announced the name of the agent on March 12, eight days after the attack.

Asked how the nerve agent came to be used in Salisbury, the Russian envoy said: "When you have a nerve agent or whatever, you check it against certain samples that you retain in your laboratories.

And Porton Down, as we now all know, is the largest military facility in the United Kingdom that has been dealing with chemical weapons research. And it's actually only 8 miles from Salisbury."

Chizhov, however, backed away when asked whether he was accusing Britain of exposing the Skripals to the lethal poison, saying: "I don't know. I don't have any evidence of anything having been used."

Another senior diplomat, Alexander Shulgin, said Saturday that Russia had discontinued its chemical weapons production when the Soviet Union collapsed.

"There has never been any program under the group name Novichok in the Russian Federation," said Shulgin, Russia's ambassador to the Netherlands and representative to the Organisation for the Prohibition of Chemical Weapons.

"Back to 1992, Russia stopped all the activities in the area of military chemistry," he said. "Last year, we completed the destruction of all chemical arsenals and the completion of this program was duly certified by the OPCW."

He added: "I've never heard about this program, about this nerve agent. That is very bellicose rhetoric."

In an interview with the Russian RT news channel on Friday, meanwhile, Russia's ambassador to Britain, Alexander Yakovenko, questioned whether the Skripals were sick at all.

"All the investigation about Skripal is classified," he said. "Nobody even saw the pictures of these people in the hospital - whether they are alive, or maybe they are just in good health. Nobody talked to the doctors. You know, there is absolutely no transparency in this case." 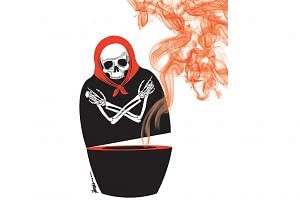 It's more than the poisoning of an ex-Russian spy 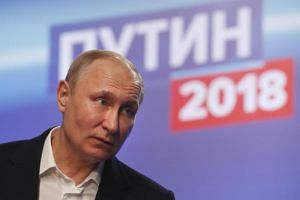 He also said that British leaders might have concocted the Skripal poisoning as a way to distract from the frustrating logjam over Britain's withdrawal from the European Union.

Putin said Sunday that Russia was willing to cooperate in the investigation. "But for this we need interest from the other side," he said. "We don't see this for now."

Sergei Skripal's poisoning has set off an angry diplomatic confrontation between Britain and Russia. Last week, May announced that the country would expel 23 Russian intelligence officers working under diplomatic cover in the embassy in London.

Johnson said the Russian side had failed to put forward an alternative explanation for the Skripals' poisoning.

"We gave the Russians every opportunity to come up with an alternative hypothesis such as the one you have just described, and they haven't," he said to the BBC interviewer Sunday. "Their response has been a sort of mixture of smug sarcasm and denial, obfuscation and delay."

Johnson said that experts from the Organisation for the Prohibition of Chemical Weapons would arrive in Britain Monday to test samples of the agent used in the Salisbury poisoning - something Russia has requested.

"We will share the samples with them," he said. "They will then be tested by the most reputable possible international laboratories."