LONDON (AFP) - Britain’s Brexit minister believes there could be a divorce deal with the European Union by Nov 21, it emerged on Wednesday (Oct 31), although Downing Street was more cautious.

Dominic Raab made the comment in a letter to the House of Commons Brexit scrutiny committee, dated Oct 24 but only now made public.

“I would be happy to give evidence to the committee when a deal is finalised, and currently expect Nov 21 to be suitable,” he wrote.

Both Raab and Oliver Robbins, Prime Minister Theresa May’s chief Brexit adviser, have been invited to address the committee on that date.

However, May’s spokesman refused to repeat the date of Nov 21, repeating only that “we wish to conclude the deal as quickly as possible”.

Previously, he had said the government was pressing for a deal this autumn.

Most of the divorce deal with Brussels is agreed but talks remain stuck on how to avoid new checks on Britain’s land border with EU member Ireland after it leaves the bloc’s single market and customs union. 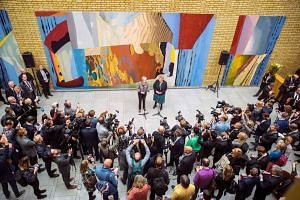 Britain, Norway agree right to remain for their citizens after Brexit

Raab will visit the UK province of Northern Ireland on Friday on a “fact-finding trip”, which will include meetings with local businesses and politicians, an official in his ministry told AFP.

Britain’s neighbours, France and Ireland, kept the heat on in Paris meanwhile, with French Foreign Minister Jean-Yves Le Drian saying “we are at a moment of truth in negotiations”.

“It is essential that we obtain guarantees from the United Kingdom” regarding plans to control the border, Le Drian told media after meeting with Irish counterpart Simon Coveney.

Coveney concurred, saying: “It’s the moment of truth. If there is to be a breakthrough in November, then we need the negotiating teams to find a way forward in the next week or so.”

EU leaders had mooted a special summit in mid-November to seal the Brexit deal, but warned earlier this month that this would not happen without more progress on the Irish issue.

Raab wrote: “The end is now firmly in sight and, while obstacles remain, it cannot be beyond us to navigate them.”

A European source told AFP on Wednesday, however, that “the technical discussions that resumed have not gone anywhere for the moment.”

British officials are keen to avoid the negotiations dragging on, with Brexit day scheduled for March 29.

A spokesman for the Department for Exiting the European Union said: “There is no set date for negotiations to conclude.”

Separately, Raab’s predecessor David Davis, who quit over the government’s approach to Brexit in July, said the final deal will likely pass when it comes to a vote in the House of Commons, before retracting himself a day later.

Davis is among a large minority of May’s Conservative MPs who strongly oppose her strategy, raising fears the deal will be rejected.