LONDON (Reuters, AFP) - British Prime Minister David Cameron will chair a meeting of the government’s emergency committee on Monday (Dec 7) to discuss severe flooding in north-west England where thousands of homes were without power for a second day.

After the country was battered by storms and heavy rain over the weekend which saw the army called in to help those affected, Britain’s Environment Agency said more than 80 flood warnings remained in place on Monday, 46 of which were severe.

Some in the north-west, which was also badly flooded in 2009 and 2005, criticised flood defences, but Environment Agency Chief Executive James Bevan described it as an “unprecedented event”, with more than a month’s worth of rain in 24 hours.

“In those areas where the water did come over the tops of the defences, firstly, the fact the defences were there reduced the overall impact and extent of the flood and, secondly, it gave people more time to prepare,” he told BBC Radio. “From time to time nature will throw things at us which will overwhelm the system and I think that is what happened here.”

Hardest hit were Cumbria and other parts of north-west England, where towns and villages were flooded with water that reached waist height in some places.

In Cumbria, the torrents caused the historic Pooley Bridge to collapse, and police said two others had also been "washed away". In London, a man was killed after he was blown into the path of a bus, police said.

"The thoughts of the whole country will be with the people in Cumbria and the north-west who have suffered so terribly from the devastating storms this weekend," Prime Minister David Cameron said in a statement. 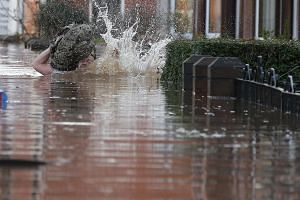 "The government is doing everything it can to help those who have seen their homes flooded - and to try and prevent further damage."

Some residents trudged through the waters carrying their possessions, including pets, while others were helped onto dinghies and even a canoe crewed by volunteers.

Many elderly flood victims moved up to the second floor of their homes and leaned out of their windows as they waited for help.

Desmond is the fourth named storm to hit Britain in recent months.

Around one in six properties in England are at risk of flooding, the government says, and experts say the risk is growing in correlation with climate change.