LONDON (AFP) - After British lawmakers on Wednesday (March 27) failed to find a majority for any Brexit alternative and Prime Minister Theresa May offered to resign if Parliament backed her own plan, what could happen next?

Britain is left with four general directions: back a deal, go for no deal, negotiate a long delay to work out a new strategy, or stop Brexit altogether.

Those options could entail various courses of action, all of which appear to lead either to Mrs May's departure or a general election - or both.

Leave with deal on May 22

A new vote on the agreement, which allows for a long transition period and time for trade ties to be negotiated, will be brought forward only if it has sufficient support to pass.

In a desperate gamble to get the deal over the line, Mrs May told her MPs that she will resign before the start of full-blown trade negotiations with the European Union if they back it. 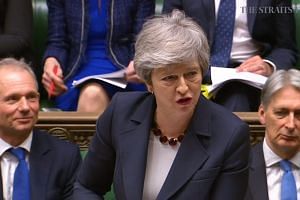 If that works, Britain would leave the EU on May 22, and Mrs May would step down some time in the summer.

If the deal is not passed, and no other course of action can be agreed on, the default option would be that Britain crashes out of the EU without a deal.

This could generate economic shockwaves on both sides of the Channel and cause severe delays at border points, despite preparations to mitigate these risks.

The European Commission said on Monday that this option was "increasingly likely" and announced that its no-deal Brexit preparations have been completed.

Mrs May has not ruled out the possibility of a no-deal, though MPs have voted against ever leaving without a deal.

MPs held "indicative votes" on Wednesday on a range of alternative Brexit options that could rip up the withdrawal agreement and remove some of Mrs May's red lines, such as ending freedom of movement.

But none of the eight options - which included staying in the EU customs union and revoking Article 50 altogether - achieved a majority, although they are expected to try again next Monday.

If no course of action can be agreed on, Britain could ask EU leaders for another, much longer delay ahead of the current deadline of April 12.

That would mean it would have to hold European Parliament elections at the end of May.

The European Commission, the EU's executive arm, has advised EU leaders that this longer extension should be at least until the end of 2019 and possibly much longer to allow for a proper change in Brexit strategy.

The longer delay would also allow time for a change in prime minister if Mrs May quits.

It would open up other options too such as holding a general election or, perhaps, a second referendum.

Britain's Electoral Commission has budgeted for European elections and could hold them at short notice but Mrs May has said it would be "unacceptable" to take that route.

This is by far the least likely option but is still a possibility.

Between 500,000 and one million marchers are estimated to have flooded London last Saturday calling for a second referendum on EU membership.

The European Court of Justice has ruled that Britain can unilaterally revoke its Article 50 notification - the formal procedure for leaving the EU.

If the stand-off between Parliament and government persists, Mrs May could call a general election.

It would reset Parliament, and a clear outcome with a government majority could result in a much stronger administration.

However, for both major parties, finding a clear Brexit manifesto that all their MPs can commit to could prove a challenge.