Britain is voting in a historic referendum that will decide whether the country would leave or remain with the European Union - a bitterly-fought, knife-edge vote that is closely watched not only in Europe but also around the world -  as latest polls indicate a shift towards the "Remain" camp.

Storms overnight have led to floods in London, disrupting the early morning commute. Trains on the London Overground have been cancelled or severely delayed. The met service has issued floods warnings in the south-east of Britain.

The wet outlook, which also extends to the north-west of the country, could boost the Leave campaign, which is most likely to benefit from a low turnout, according to polling experts YouGov.

Some voters took to Twitter to complain about the wet weather and flooded polling stations.

It's a bit damp in the south east of England 💦https://t.co/8B86Z7cihb pic.twitter.com/dWYDLbnlgb

Biggest vote of my life..

..I didn't realise I'd have to walk on water to cast it !#Kingston #Surbiton #Tolworth pic.twitter.com/LTTb9EXXEE

I just had to be carried into a flooded polling station. It's something biblical... #remain pic.twitter.com/T8qeGC3zEd

Despite the wet weather, long queues were seen at some polling stations, according to local media. 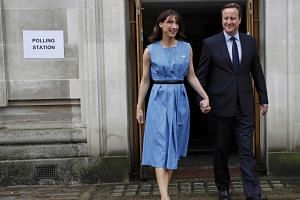 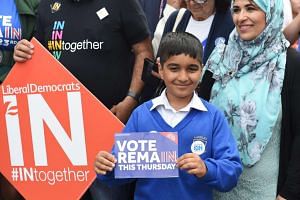 Shift towards 'Remain' camp: A round-up of opinion polls in Britain over the Brexit vote 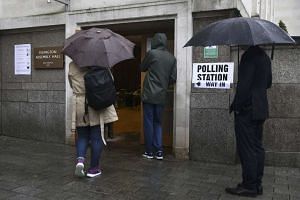 Carpenter Liam Collins, 45, was one of the first voters at a polling station in a chuch in Rotherhithe. "It's one of the most important decisions this country will make. It affects everyone," he said before casting his ballot and making his way to work.

Ms Ellen Chew, 48, a Singaporean who has lived in London for 10 years, cast her vote this morning. "If the UK votes in, I am sure I will stay here longer as my business expansion plans will proceed. So it all depends on the outcome today," said the restaurateur.

Volunteers from the official Remain campaign, Britain Stronger in Europe, were giving out leaflets and stickers outside Shoreditch Overground station. "It's the biggest campaign day of this referendum. We're all out there today, reminding people to vote," said one volunteer.

There are some 46.5 million registered voters, a record number for a British poll. Besides British voters, citizens of 54 Commonwealth countries such as Singapore, Malaysia, Brunei and Sri Lanka, as well as Ireland, have voting rights too - a legacy of the British empire. Census figures from 2011 show that about 960,000 Commonwealth citizens living in England and Wales are eligible to vote.

Voting will close at 10pm (5am Friday Singapore time) and the first results are expected early Friday morning local time.

OPINION POLLS TOO CLOSE TO CALL

The referendum comes after a four-month battle for votes between the Leave and Remain camps.

On the eve of the referendum, two polls – both conducted over the Internet – put the Leave camp ahead by one or two percentage points, well within the margin of error.  In one telephone poll, however, Remain camp took a notable lead of 48 per cent, ahead of Leave camp with 42 per cent and the rest undecided, according to a survey by ComRes for the Daily Mail and ITV News.

Most economic, political and defence authorities - including nearly all foreign leaders - have joined the call for Britain to stay in the EU, and they have issued dire warnings about the consequences of the country exiting the bloc, popularly known as Brexit.

Economic forecasters have said Brexit could push the country back into recession, with the rest of the globe vulnerable to the ripples.

But advocates argue that cutting off EU ties will restore Britain's sovereignty and give the country the latitude to dramatically reduce immigration, which has hit record highs as people from European countries, including Poland, Romania and Hungary, have flocked to the relative prosperity of the British economy.

After several worrying weeks for the Remain camp led by Prime Minister David Cameron - when polls showed it had fallen behind the Leave camp - fresh polls over the weekend suggested that the result could go either way.

JITTERS ACROSS THE WORLD

Europe and the rest of the world, including Asia and Singapore, have been watching the referendum closely, nervous that a Brexit might spark turmoil in global markets. Traders, investors and companies are preparing for volatility in financial markets whatever the outcome of the vote

Singapore Exchange Ltd (SGX) said it has raised the amount of cash firms must pledge to cover trading positions due to an expected rise in market volatility SGX is the first exchange in Asia to increase trading margins, although several others including the Hong Kong Exchanges and Clearing Ltd and the Australian branch of London Stock Exchange Group-owned LCH have privately said they may also hike margins or require additional intra-day margin calls, traders told Reuters news agency.

On the eve of the referendum, politicians made a last-ditch attempt to woo undecided voters, pleading their case on national television and at rallies, and criss-crossing cities to push their message one last time.

Mr Cameron acknowledged the hot-button issue of immigration, promising that reforms will continue should Britons vote "In".

"There are good ways to control immigration but leaving the EU, leaving the single market, damaging our economy, must be the wrong answer," he said in a television interview on the BBC.

Former London Mayor Boris Johnson, a leader of the Leave campaign, kicked off a tour of the country by plane, holding a salmon almost to his lips at Billingsgate Fish Market in London - a nod to the island nation.

"This is our last chance to take back control and it's worth fighting for," he told Sky News.

In France, President Francois Hollande warned on Wednesday that if Britons vote to leave the EU, it would be an irreversible decision that could seriously jeopardise Britain's prized access to the bloc's single market.

European Commission President Jean-Claude also issued a similar warning, saying there would be no re-negotiation of a package of measures that EU governments agreed with London in February aimed at keeping Britain in the bloc.