LONDON (NYTIMES) - Trucks parked along freeways or stuck in gridlocked ports. Food disappearing from supermarket shelves and stocks of medicines under strain. The military on standby, ready to step in to avert crisis.

For a British public that has often tuned out from the mind-numbing complexities of Britain's withdrawal from the European Union, recent government statements, amplified by raucous newspaper headlines, have finally become comprehensible - and alarming.

For days, talk has swirled about government preparations for a disruptive departure from the European Union without any agreement - a scenario that could mean new border checks, log-jammed ports, marooned trucks, and food, drugs and other essential supplies drying up.

The speculation was prompted by a government promise to prepare for all eventualities, including the extreme one of a "no deal" departure from the European Union, or Brexit.

But even before the first of around 70 official "no deal" warning documents for businesses and consumers was published, they had - through the filter of the British news media - started to sound ominously reminiscent of rationing and other preparations during World War II.

On Monday (July 30), the government insisted that it had "no plans" to involve the army and was backpedalling over the timing of the 70 warning notices.

They were originally scheduled to appear regularly throughout the summer, something that would have generated maximum publicity. Now, the documents are expected in August and early September, probably in two batches.

Already, however, efforts to prepare for the possibility of a "no-deal" Brexit have backfired by drawing attention to the extreme consequences Britain might face, and to the fact that it might not be able to do much to mitigate them.

And they have angered the very people they were designed to please: hardline supporters of Brexit who had been pressing the government to make "no deal" preparations so the country could threaten to walk away from negotiations with the European Union.

"It has not been a tremendous success, and I don't know what the hell the thinking is," said Professor Anand Menon, who teaches European politics and foreign affairs at King's College London.

"This started off as a way to placate the Brexiteers," he said, "and then it turned into something that the Brexiteers hate because the contingency planning sounds so awful."

Now, with opinion surveys suggesting that worries about chaos are rippling through to the public, Brexit supporters have renewed their denunciations of "project fear" - a term they used successfully in the 2016 Brexit referendum campaign.

They have only themselves to blame. For months, they urged the government to prepare for a no-deal scenario to strengthen its negotiating position with the European Union, and Prime Minister Theresa May ultimately relented.

He was reportedly told by Mr Doug Gurr, a senior executive at Amazon, that there could be "civil unrest" within two weeks if Britain quit the bloc with no deal.

Last week, Mr Raab said he would ensure "adequate food supplies" in the event of a "no deal" Brexit, but suggested that this would be the responsibility of the food industry as it would "be wrong to describe it as the government doing the stockpiling".

If he expected retailers and suppliers to begin stocking up on essential goods, he seems not to have spoken first to key figures.

"Stockpiling of food is not a practical response to a no-deal on Brexit and industry has not been approached by government to begin planning for this," the British Retail Consortium, which represents many retail firms, said in a curt statement.

"Retailers do not have the facilities to house stockpiled goods and in the case of fresh produce, it is simply not possible to do so," it added.

Others complained that the government looked incompetent and naïve.

"The idea of stockpiling and storage is a red herring," said Mr Shane Brennan, chief executive of the Food Storage and Distribution Federation, a trade lobby group.

"Food supply systems don't work like that," he added. "Food is kept moving. It's out of the ground and to the point of sale as quickly as possible. The idea of stockpiling it suggests a lack of understanding about how things work."

Britain is vulnerable because it sources 30 per cent of its food from the European Union plus a further 11 per cent through trade deals negotiated by the bloc, according to Feeding Britain: Food Security After Brexit, a report by the Centre for Food Policy.

Contracts for food supplies are typically set 12 months ahead, with food arriving via a complex logistics system that runs on a just-in-time basis and often provides three to five days' supply, it said.

The port of Dover, through which thousands of trucks pass every day, has warned that just a two-minute delay in processing time could lead to traffic lines of 27km.

"If there are delays due to added inspections, you have all the Armageddon that goes with that," said Mr Nigel Jenney, chief executive of the Fresh Produce Consortium, a group that represents companies in that part of the food sector. "These things are highly perishable, and they can't sit there for days."

In theory, the European Union and Britain have an interest in keeping trade flowing. 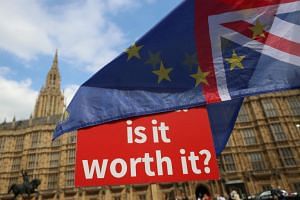 Britain to set out 'sensible precautions' for no deal Brexit

The British government has negotiated a standstill transition period, during which trading ties would remain the same, from the departure date in March next year until December 2020. The catch is that this is conditional on a withdrawal agreement that still has to be finalised.

Mr Robert Hardy, commercial director of Oakland International, a logistics and distribution specialist, dismissed some of the more dire scenarios and argued that the British authorities would waive the need for trucks to be stopped at key ports like Dover.

Customs formalities could be performed later in the process, something permitted under existing rules, Mr Hardy said.

"For imports, I don't see any major changes," he said.

That said, he acknowledged that there could be big problems for exporters if - as is likely - officials in France were to impose new checks.

Others point out that trucks delivering supplies to Britain would have difficulties getting home, thereby disrupting the supply chain and affecting imports.

Mr Ian Wright, director general of the Food and Drink Federation, which represents food and non-alcoholic drinks manufacturers, said the group was investigating strategies to limit the impact of a no-deal Brexit.

But the scope for stockpiling is limited by the cost, the availability of storage space and by the fact that fresh food spoils quickly.

"We are not going to run out of food - this isn't about the return of rationing," Mr Wright said. "But there could be some shortages and an erosion of choice."

For the government, there is one small silver lining to yet another bad Brexit news story.

If Mrs May can negotiate a deal with the European Union in the fall, and avoid a disruptive exit from the bloc, her agreement will sound better than the chaos of the "no deal" alternative, Professor Menon said.

"Perhaps it helps Theresa May to point back to all the speculation about 'no deal' and say, 'At least I have avoided all that,'" he said.