HERNING, Denmark (AFP) - Briton Andrew Tristram has been left an "orphan" by Brexit, but he's found another welcoming home in Europe and will soon become a citizen in Denmark, champion of a European Union a la carte.

Before June 23, 2016, the thought of obtaining Danish citizenship had never occurred to him. But after Britain's referendum result in favour of Brexit, the 47-year-old can't wait to get his hands on his new European passport.

"I haven't had a Danish passport before because it feels a bit like treason, like I'm giving up on Britain. But they gave up on me," Tristram says, sitting in the foyer of the theatre in Herning, western Denmark, where he works in production.

In November 1992, he moved to the europhile Scandinavian country after falling in love with a Danish woman he met in London. He has lived here since then, while maintaining close ties with his native Wales.

Like all Britons living outside the United Kingdom for more than 15 years, he was not entitled to vote in the Brexit referendum.

"All these people decided what happens in my life and I don't get a say," he fumes.

"I thought it meant something to have a British passport." But "when Brexit happened I lost something," he says, adding that he's "always been proud of being a British citizen".

Twenty-six years in Denmark has changed "his outlook on life", he reflects, citing among other things the fact "that I think that the European Union is a good thing". 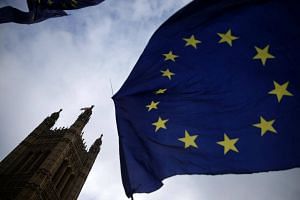 Deal, no deal or no Brexit? The Brexiteers' dilemma

Brexit backstop: What are the assurances that the EU and UK have agreed on?

Since joining the EU in 1973, Denmark has zealously guarded its sovereignty, negotiating four key opt-outs from European cooperation: on security and defence, citizenship, police and justice, and the adoption of the euro.

As a result, Denmark is considered the champion of a Europe a la carte.

It is perhaps no surprise then that the population is among the most pro-EU in Europe, with 75 per cent of Danes considering the bloc a good thing compared to 61 per cent of French and 39 per cent of Czechs, in a 2018 European Parliament survey.

"Angry" and "disappointed" by the Brexit referendum, Tristram, who has two sons with his wife, applied online in January 2018 to become a Danish citizen.

First, he had to pass a language proficiency test and a citizenship test, designed to evaluate his knowledge of his adopted country.

Highly criticised as difficult when it was introduced, the test covers a range of subjects, from the Vikings to the 1973 legislative election.

"Not because I'm bragging, but we had a 25th anniversary party and one of the things we did is that we took the citizenship test. So I was surrounded by Danes and the person who had the most right answers was me."

He completed the real test in just six of the 45 minutes allotted.

"You get a booklet and everything apart from the last five questions ... is in the booklet."

Candidates need to correctly answer 32 of 40 questions to pass. Almost half of those who take the test fail.

Andrew has been waiting for more than a year for his citizenship application to be processed.

"If I'm exceptionally lucky then I'll be on the list (of people naturalised) in autumn this year," he says.

There's no chance he'll get his citizenship before Britain's scheduled exit from the EU on March 29.

"I'm not expecting to be thrown out of Denmark, but I can see that the summer holiday can very well be a problem." He and his family usually drive to Britain, passing through a number of European countries on the way.

"If I'm going to have to apply for a visa to every single country, it's going to be an expensive holiday," he moans.

But the real problem is the uncertainty about what Brexit will entail.

"None of us knows what's going to happen," he says, more fed up with the British political delays than the slow Danish naturalisation process.

One thing is certain: he's excited to get a Danish passport.

"It makes you feel a bit like a secret agent. You open the drawer, 'Which passport am I going to use?'. That'll be quite cool," he smiles.

A total of 383 Britons are among the 10,108 foreigners who have obtained Danish nationality since 2017.

More than a million Britons live outside Britain in the European Union, including 15,000 in Denmark.