This year, he fears uncertainty around Britain's departure from the European Union will keep his eastern European workers away and the asparagus will stay in the ground.

Asparagus grown in Britain is feted by chefs as among the world's best but the seasonal worker shortage threatens the country's asparagus industry and the viability of Mr Chinn's Cobrey Farms business.

It is a predicament shared by many British fruit and vegetable farmers, almost totally reliant on seasonal migrant workers from EU member states Romania and Bulgaria taking short-term jobs that British workers do not want.

At Mr Chinn's farm, which turns over more than £10 million (S$18 million) a year, the workers pick the premium asparagus spears that can grow up to 20cm a day by hand. Sometimes, they pick them twice a day before dispatching them to customers such as Marks and Spencer and Britain's biggest supermarket, Tesco.

"It is incredibly clear cut - there is no UK asparagus on your supermarket shelves without seasonal migrant workers," Mr Chinn, whose great-grandfather started as a tenant farmer in 1925, told Reuters.

"We're really at the point where we either import the workers or we import the asparagus."

Britain's asparagus season is short and early - traditionally running from April 23, known as Saint George's Day, to Midsummer's Day in mid-June. It will be the first big test of the 2019 seasonal labour crisis. 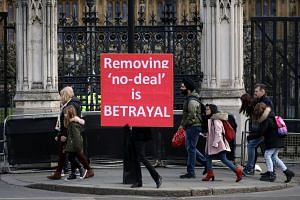 How a no-deal Brexit is shaping up, from banks to food supplies

This year, Mr Chinn's team has had to work much harder to recruit Romanians and Bulgarians, who are perplexed by the long Brexit process as Prime Minister Theresa May seeks Parliament's approval for a divorce deal with the EU. They are also wary of the welcome they will receive from Britons, who voted in 2016 to leave the EU.

Though Cobrey Farms has signed up 1,200 workers who are due to start arriving at the end of this month, Mr Chinn fears many will not turn up. He does not think he will be able to harvest the entire crop, meaning valuable asparagus will be left in the fields.

Mr Chinn's concern grew after 20 of the 100 or so workers due to help cultivate the crops in January failed to turn up.

Of 247 workers due to arrive between March 31 and April 6, 125 are yet to book flights, he said. They include 38 who have worked at Cobrey Farms before and stayed in the dozens of static caravans that stand at the foot of the hills on the farm.

Mr Chinn, who voted Remain in the 2016 Brexit referendum, said uncertainty over eastern Europeans' employment rights and how long they can stay, combined with a fall in the value of the pound, meant Germany and the Netherlands were now considered more attractive destinations.

"They go somewhere which is most straightforward and any, even minor, hurdles you put in their way is just nudging them ever closer to going somewhere else," he said.

With just 11 days to go until Britain is due to leave the EU, the government is yet to agree a withdrawal arrangement or an extension, meaning the risk of a disorderly "no-deal" Brexit cannot be ruled out.

If Britain agrees on a divorce deal, a transition period will kick in, maintaining freedom of movement until the end of 2020. In the event of no deal, EU citizens arriving after March 29 would need to register to work for more than three months.

Ms Elina Kostadinova, a 28-year-old harvest manager at Cobrey Farms who is from Varna on Bulgaria's Black Sea, said many workers were worried about coming to Britain because of Brexit.

"It would be wonderful if the UK government could make a decision, so we can relay this message."

Mr Chinn said the idea of British workers plugging the gap was fanciful. He does not expect much help from the supermarkets, where sales volumes have already been negotiated for the season and prices have been fixed, barring exceptional circumstances.

Britain's fruit and vegetable sector relies on up to 80,000 seasonal workers from the EU each year. Having previously been inundated with applications, labour agencies say interest dropped off in 2017 and 2018 as workers from Romania and Bulgaria opted to go elsewhere in the EU.

For the last two seasons, Britain has been short by around 10,000 workers, threatening the food supply and forcing farms to pay higher wages and bonuses. At the end of the summer, as workers want to leave, farms will offer free accommodation and pay the cost of flights to try to persuade them to stay on.

Concordia, a labour agency charity that finds EU pickers for British farms, said it now has to work much harder to recruit.

"UK agriculture is definitely entering into a crisis. No labour means no harvesting, which means no fruit and no vegetables on shelves in British supermarkets," chief executive Stephanie Maurel told Reuters.

She was speaking in Moscow after the British government sanctioned a pilot trial for 2,500 workers to enter the country from Russia, Ukraine and Moldova for up to six months over the next two years.

"We can't change this natural cycle of the crop... The crop will come out the ground when it warms up," he said. "So the key is about not waiting for a total disaster that wipes out large swathes of UK horticulture."