LONDON (BLOOMBERG) - Mr Boris Johnson has dramatically boosted public spending since taking office, fuelling speculation that the British Prime Minister is preparing not only for Brexit by Oct 31, but a general election as well.

The two are likely to be linked - either before or after the United Kingdom leaves the European Union.

On Monday (Aug 5), Mr Johnson - in office less than two weeks - travels to Lincolnshire, eastern England, to lay out details of his £1.8 billion (S$3 billion) boost for the National Health Service (NHS), delivering on his 2016 Brexit campaign vow while maintaining a focus on domestic policies.

It follows recent pledges to hire more policy officers and increase infrastructure spending, including on railways.

It's part of what the government calls economic "boosterism" as it prepares for Brexit on Halloween; it includes a cash injection of £2.1 billion to prepare the economy for a no-deal split from the EU.

But despite Mr Johnson's words to the contrary, politicians are increasingly taking the rapid domestic policy roll-out as proof he's gearing up for a snap poll. On Sunday, even Conservative Party chairman James Cleverly didn't rule it out.

"We're not going to initiate a general election," Mr Cleverly told Sky News, a nod to the fact that the most likely trigger for an early national poll - the next isn't until 2022 - would be a no-confidence vote in Parliament put forward by the main opposition Labour Party. 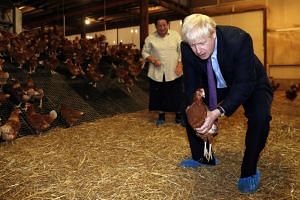 On the same programme, Labour's health spokesman Jonathan Ashworth said an election could be "very soon", suggesting the NHS cash boost was a government tactic to win over voters. The party has strongly hinted it will pursue a confidence vote when Parliament returns in early September.

Last week's special election in the Welsh constituency of Brecon and Radnorshire showed the potential risk to the government of an early vote.

Defeat for Mr Johnson's Conservatives reduced his working majority in Parliament to just one, making it that much harder to get any Brexit deal he negotiates with Brussels ratified by lawmakers. One theory is the Prime Minister will seek to reset the parliamentary arithmetic before he tries.

Yet the result also showed that Mr Johnson's "do or die" pledge to deliver Brexit in the autumn hasn't yet neutralised the threat from Mr Nigel Farage. In Brecon, the Tories would have won, had their candidate secured the 3,331 votes that went to Mr Farage's Brexit Party. Instead, the anti-Brexit Liberal Democrats took the seat.

Aware of the electoral threat, more than 10 Tories have asked the Brexit Party not to run against them, the Mail on Sunday reported.

None of which makes a compelling case for the government to pursue a snap poll. But after Brecon, Mr Johnson is even more vulnerable to a no-confidence vote, especially given there are plenty of potential Tory rebels, including former Cabinet ministers, opposed to a no-deal Brexit - though whether they would vote to bring down their own government is debatable.

According to the Telegraph, Mr Johnson's senior adviser, Mr Dominic Cummings, told ministers last week that Parliament won't be able to stop a no-deal Brexit even if the government loses a no-confidence vote, because the prime minister would be able to schedule an election for after the Oct 31 deadline for the UK to leave.

That would put Mr Johnson closer to a more optimal scenario of fighting a general election on his domestic agenda, having already already delivered Brexit. But he's unlikely to get there without a fight in both Parliament and the courts, where anti-Brexit activist Gina Miller is seeking to block any attempt to get Brexit through while the legislature isn't sitting.

"There are a number of things the House of Commons can do, including bringing down the government and setting up a new one in its place," prominent Tory rebel Mr Dominic Grieve told BBC radio on Sunday. "There are quite a number of colleagues who I think share my very considerable concern about no-deal, which is something which has never been put to the people as an option."

On Sunday, Labour's Mr Ashworth said cross-party efforts to prevent a no-deal divorce from the EU would gather pace once the government puts the legislation it needs for Brexit to Parliament in September.

"We will work to stop no-deal," he told Sky News.