LONDON (REUTERS) - Brexit campaigner Boris Johnson has called on Prime Minister Theresa May to rip up her proposal for Britain's exit from the European Union, ratcheting up the pressure on Mrs May as she prepares to face her divided party at its annual conference next week.

Just six months before the United Kingdom is due to leave the European Union on March 29, 2019, little is clear: PM May has yet to clinch a Brexit divorce deal with the EU and rebels in her party have threatened to vote down any deal she makes.

"This is the moment to change the course of the negotiations and do justice to the ambitions and potential of Brexit," Mr Johnson, who resigned in July as foreign secretary over Mrs May's Brexit proposals, wrote in Friday's (Sept 28) Daily Telegraph.

Mr Johnson, the bookmakers' favourite to succeed Mrs May, said Mrs May's plans would leave the United Kingdom half in and half out of the club it joined in 1973 and in effective "enforced vassalage".

Under the headline, "My plan for a better Brexit", Mr Johnson called for a "Super Canada-type free trade agreement" and cast the EU's backstop proposals for Northern Ireland as amounting to the economic annexation of part of the UK.

The plan outlined by Mr Johnson gained support from other rebels such as Conservative lawmaker Jacob Rees-Mogg, who is pushing for a deeper break with the EU.

"This is an opportunity for the UK to become more dynamic and more successful, and we should not be shy of saying that - and we should recognise that it is exactly this potential our EU partners seek to constrain," Mr Johnson wrote. 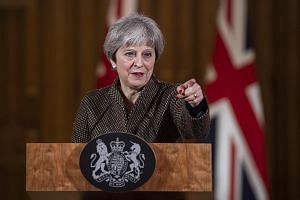 Labour calls for election if no Brexit deal

More than two years since the 2016 Brexit referendum, the UK, its politicians and its business leaders remain deeply divided over Brexit, considered to be one the most important decisions in post-World War II British history.

A poll of polls published on Friday showed voters would now vote 52 to 48 per cent in favour of remaining in the EU were there to be another Brexit referendum.

But researchers cautioned that a narrow victory for those hoping to reverse Brexit would be heavily contingent on getting those who did not vote last time to turn out.

"True, Remain enjoys a lead in the polls. But that lead remains a narrow one, and there is little sign of it growing,"said Mr John Curtice, senior research fellow at the National Centre for Social Research.

Mrs May, who voted to stay in the EU, is trying to clinch a divorce deal with the EU while grappling with an open rebellion in her Conservative Party, which convenes in the English city of Birmingham on Sunday for its annual party conference.

"There has been a collective failure of government, and a collapse of will by the British establishment, to deliver on the mandate of the people," Mr Johnson wrote.

Mrs May has repeatedly said her Brexit proposals are the only viable ones.

A 30-year schism inside her party over Europe helped sink the premierships of the past three Conservative prime ministers - Mrs Margaret Thatcher, Mr John Major and Mr David Cameron.