LONDON (AP,BLOOMBERG) - British Prime Minister Boris Johnson rebuffed allegations on Friday (Sept 27) that he was whipping up social divisions with charged language about his Brexit opponents, saying the only way to calm the simmering tensions was to stop delaying and leave the European Union.

Opponents said Mr Johnson's language could incite violence. But he said the country's social tensions were being caused by Britain's failure to leave the EU more than three years after voting in a referendum to do so.

"Once you do that, then so much of the heat and the anxiety will come out of the debate," Johnson said on Friday as he visited a hospital - part of unofficial campaigning for an election that looks set to come soon. "Get it done and then we will all be able to move on."

Mr Johnson argues that he is safeguarding the will of the public against the interests of the political establishment, which wants to remain in the EU.

In truth, the British public and its politicians are both bitterly divided over how, or even whether, to leave the 28-nation bloc.

Concerns abound over how the country would adjust to the sudden shock. Britain's government watchdog says there is still a "significant amount" of work to do to ensure the country has an adequate supply of medical drugs in case of a no-deal Brexit.

The National Audit Office said additional shipping capacity chartered by the UK for sending goods across the English Channel might not be operational until the end of November. Of the more than 12,300 medicines licensed in the UK, about 7,000 arrive from or via the EU, mostly across the Channel.

Mr Johnson says good progress is being made in talks, which continued with a meeting between UK Brexit Secretary Stephen Barclay and EU negotiator Michel Barnier in Brussels.

The EU, however, says it is still waiting for concrete proposals from Britain on maintaining an open border between the UK's Northern Ireland and EU member Ireland - the key sticking point to a Brexit deal. 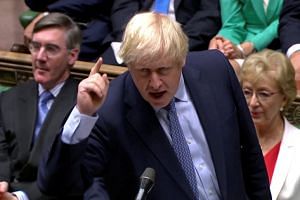 Brexit drama runs on, with no clear end

The head of the European Union's executive Commission said a no-deal Brexit would be a "catastrophe" for the UK and Europe - but it would be Britain's fault.

Commission President Jean-Claude Juncker said he and Mr Barnier were doing everything they can to secure an agreement.

"If in the end that doesn't succeed, the responsibility for this lies on the British side alone," he told German daily Augsburger Allgemeine.

In a bid to prevent a no-deal Brexit, Johnson's political opponents in Parliament have passed a law compelling the government to ask the EU for a delay to the UK's exit if no deal has been struck by late October.

Mr Johnson is adamant he won't do that - but also says he will comply with the law.

Former Conservative prime minister John Major said he feared the government would use constitutional trickery to get around the legislation by suspending it until after the Oct 31 Brexit deadline.

British International Development Secretary Alok Sharma refused to say whether the Cabinet had discussed such a tactic.

"We are absolutely going to comply with the law, we are working incredibly hard to get a deal and we will be leaving on Oct 31," he said.

Nicola Sturgeon, the leader of the Scottish National Party and First Minister of Scotland, indicated she would support installing Labour leader Jeremy Corbyn or another candidate as temporary prime minister until a no-deal Brexit is off the table.

If other opposition parties all agree, this could pave the way for a Corbyn-led administration within weeks or days.