STOCKHOLM (AFP) - Music icon Bob Dylan will not attend the Nobel ceremony in December to accept his literature prize because he has “other commitments”, the Swedish Academy said on Wednesday (Nov 16).

“The Swedish Academy received a personal letter from Bob Dylan yesterday where he explained that he could not make himself available in December...,” it said in a statement.

“He wishes that he could accept the award personally, but other commitments make it unfortunately impossible. He underlined that he feels incredibly honoured by the Nobel prize,” it added.

The Swedish Academy said it respected Dylan’s decision, but that it was “unusual” for a Nobel laureate not to come to Stockholm to accept the award in person.

Nobel laureates are honoured every year on Dec 10 – the death anniversary of the prize’s founder Alfred Nobel, a Swedish industrialist, inventor and philanthropist. 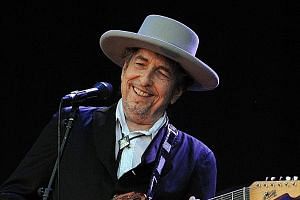 Several other literature prize winners have skipped the Nobel ceremony in the past for various reasons – Doris on grounds of ill health, Harold Pinter because he was hospitalised and Elfriede Jelinek due to social phobia.

“We look forward to Bob Dylan’s Nobel lecture, which he must carry out – it is the only requirement – within six months starting from Dec 10, 2016,” the academy said.

But Sara Danius, the permanent secretary of the Swedish Academy, who received the news about Dylan not attending, told TT news agency that she didn’t know how or when he would deliver the lecture.

The 75-year-old, whose lyrics have influenced generations of fans, is the first songwriter to win the literature prize, although literature experts bet on writers such as Salman Rushdie, Adonis or Ngugi wa Thiong’o.

Dylan’s decision not to attend the ceremony does not come as a surprise. The singer didn’t say a word about his prize on the day it was announced on Oct 13 when he was performing in Las Vegas.

The American writer of Blowing In The Wind, Like A Rolling Stone, and Mr Tambourine Man confined himself to his songs.

Danius said she was “not disappointed” over Dylan skipping the ceremony.

“The prize is not (given) so that one will travel to Stockholm, but it is an award for a life’s work,” she said, adding that Dylan did not tell her what his “other commitments” were.

Asked on Oct 28 by Britain’s Daily Telegraph newspaper if he would attend the Nobel prize winners’ banquet, Dylan said: “Absolutely. If it’s at all possible.”

Academy member Swedish writer Per Wastberg accused Dylan of being “impolite and arrogant”, and said it was “unprecedented” that the academy did not know if Dylan intended to pick up his award.

French philosopher Jean-Paul Sartre rejected the Nobel prize in literature in 1964, but his name is still on the list.

The value of the prestigious award amounts to 8 million kronor (S$1.2 million) in 2016.