NICE, France (REUTERS) - French authorities were trying to determine on Friday (July 15) whether a Tunisian who killed at least 84 people by ploughing a truck into Bastille Day crowds had acted alone or with accomplices, but said the attack bore the hallmarks of Islamist militants.

Thursday night’s attack in the Riviera city of Nice plunged France into new grief and fear just eight months after gunmen killed 130 people in Paris. Those attacks, and one in Brussels four months ago, shocked Western Europe, already anxious over security challenges from mass immigration, open borders and pockets of Islamist radicalism.

The truck zigzagged along the city’s seafront Promenade des Anglais as a fireworks display marking the French national day ended. It careered into families and friends listening to an orchestra or strolling above the Mediterranean beach towards the century-old grand Hotel Negresco.

At least 10 children were among the dead. Of the scores of injured, 25 were on life support, authorities said on Friday.

Witness Franck Sidoli said he had watched people mown down before the truck finally stopped just five metres away from him.

“A woman was there, she lost her son. Her son was on the ground, bleeding,” he told Reuters at the scene.

The driver, 31-year-old Mohamed Lahouaiej Bouhlel, was shot dead by officers at the scene. He was known to police for petty crimes but was not on a watch list of suspected militants. He had one criminal conviction, for road rage, and was sentenced to probation three months ago for throwing a wooden pallet at another driver.

The investigation “will try to determine whether he benefited from accomplices,” Paris prosecutor Francois Molins said.

“It will also try to find out whether Mohamed Laouaiej Bouhlel had ties to Islamist terrorist organisations.”

“Although yesterday’s attack has not been claimed, this sort of thing fits in perfectly with calls for murder from such terrorist organisations,” Molins added.

Bouhlel’s ex-wife was in police custody, Molins said. He had three children. Police found one pistol and various fake weapons in his truck.

French Prime Minister Manuel Valls told the evening news that Bouhlel was “one way or another” linked to radical Islam.

“Yes, it is a terrorist act and we shall see what links there are with terrorist organisations.”

Yet despite numerous French officials from President Francois Hollande down describing it as a terrorist attack, by nightfall on Friday officials still had not disclosed any direct evidence linking Bouhlel with extremists.

Interior Minister Bernard Cazeneuve, asked if he could confirm the attacker’s motives were linked to Islamic militancy, said: “No. ...We have an individual who was not known to intelligence services for activities linked to jihadism.” 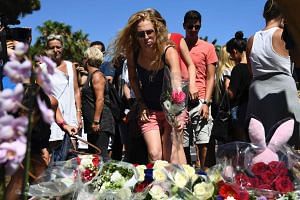 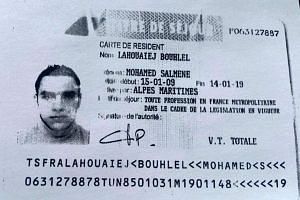 Attack in Nice: Handsome but 'frightening', truck driver had run-ins with the law

A US official familiar with Washington’s assessment said the attack was thought to have been carried out by a “lone wolf” inspired but not directed by Islamic State in Iraq and Syria (ISIS).

The former top terrorism investigator for the French judicial system said that while the attack fits the profile of the kind undertaken by militant groups, the available evidence suggests the attacker had no evident connection with militant organisations or ideology.

Jean-Louis Bruguiere, formerly the top Paris-based investigative magistrate handling terrorism-related cases, told Reuters no French or European intelligence or security agency had any trace on the suspect and no evidence has surfaced to connect him to any militant group or other suspects or even to casual contact with militant literature or propaganda.

He said so far there is no evidence Bouhlel had any association with any religious group or faction but that there was evidence he was estranged from his family and going through some kind of divorce.

Dawn broke on Friday with pavements smeared with dried blood. Smashed strollers, an uneaten baguette and other debris were strewn about. Small areas were screened off and what appeared to be bodies covered in blankets were visible.

The truck was still where it had come to rest, its windscreen riddled with bullets. “I saw this enormous white truck go past at top speed,” said Suzy Wargniez, 65, who had watched from a cafe on the promenade.

At Nice’s Pasteur hospital, medical staff were treating large numbers of injured. Waiting for friends being operated on was 20-year-old Fanny.

“The truck pushed me to the side. When I opened my eyes I saw faces I didn’t know and started asking for help,” she told Reuters. “Some of my friends were not so lucky. They are having operations as we speak.”

Neighbours in the neighbourhood in northern Nice where Bouhlel lived described him as handsome but an unsettling presence.

“I would say he was someone who was pleasing to women,” said neighbour Hanan, standing in the lobby of the apartment building where Bouhlel lived. “But he was frightening. He didn’t have a frightening face, but ... a look. He would stare at the children a lot.”

Bouhlel’s Tunisian home town Msaken is about 10km outside the coastal city of Sousse, where a gunman killed 38 people, mostly British holidaymakers, on a beach a year ago. Many people from the area have moved to France, including Nice, and money they send back has made it comparatively prosperous.

A former neighbour in Msaken told Reuters Bouhlel had left for France in 2005 after getting married, and had worked as a driver.

Relatives and neighbours in Msaken said Bouhlel was sporty and had shown no sign of being radicalised, including when he last returned for the wedding of a sister four years ago.

A nephew, Ibrahim, said he had called three days ago saying he was preparing a trip back for a family party. Bouhlel’s brother, Jabeur, said he doubted his sibling was the attacker.

“Why would my brother do something like this?” he told Reuters, adding: “We’ve been calling him since yesterday evening but he’s not responding.”

Nice, a city of 350,000, has a history as a flamboyant aristocratic resort but is also a gritty metropolis, where Islamist radicalism has brewed, away from the scenic streets of its old town. It and the surrounding Alpes-Maritimes region, with a population of just over a million, are thought to have produced as many as 10 percent of the French citizens who have travelled to wage jihad in the Middle East.

After Thursday’s attack, a state of emergency imposed across France after the November attacks in Paris was extended by three months and military and police reservists were to be called up. “France is filled with sadness by this new tragedy,” Hollande said in a dawn address that called it an act of terrorism.

Nice-Matin journalist Damien Allemand had been watching the firework display when the truck tore by. After taking cover in a cafe, he wrote on his paper’s website of what he saw: “Bodies every five metres, limbs ... Blood. Groans.”

“The beach attendants were first on the scene. They brought water for the injured and towels, which they placed on those for whom there was no more hope.”

Police carried out a controlled explosion on a white van near the home, blowing the doors open and leaving shattered glass all around. It was not clear what they found.

With presidential and parliamentary elections less than a year away, French opposition politicians seized on what they described as security failings that made it possible for the truck to career 2km  through large crowds before it was finally halted.

Christian Estrosi, a security hardliner who was mayor of Nice until last month and is now president of the wider Riviera region, had written on the eve of the attack to Hollande to demand more funding for police.

“As far as I’m concerned, I demand answers, and not the usual stuff,” Estrosi told BFM TV hours after the attack, questioning whether the government had provided enough national police officers for the fireworks display.

France is a major part of a US-led mission conducting air strikes and special forces operations against Islamic State in Iraq and Syria, and has also sent troops to West Africa to battle Islamist insurgents.

“We will further strengthen our actions in Syria and Iraq,” Hollande said, calling the tragedy – on the day France marks the 1789 revolutionary storming of the Bastille prison in Paris – an attack on liberty by fanatics who despised human rights. “We are facing a battle that will be long because facing us is an enemy that wants to continue to strike all people and all countries that have values like ours,” he said.

France is home to the European Union’s biggest Muslim population, mostly descended from immigrants from North African former colonies. It maintains a secular culture that allows no place for religion in schools and civic life, which supporters say encourages a common French identity but critics say contributes to alienation in some communities.

The Paris attack in November was the bloodiest among a number in France and Belgium in the past two years. On Sunday, a weary nation had breathed a sigh of relief that the month-long Euro 2016 soccer tournament had ended without serious incident.

US President Barack Obama condemned what he said “appears to be a horrific terrorist attack”.

In televised remarks, he later said the United States would stand with France and keep up the fight against Islamic State: “We will not be deterred. We will not relent.”

On social media, Islamic State supporters celebrated the high death toll and posted a series of images, one showing a beach purporting to be that of Nice with white stones arranged to read “IS is here to stay” in Arabic.