PARIS (NYTIMES) – At least 13 people, including a child, were injured on Friday (May 24) when a suspected explosive device went off near a bakery in the central French city of Lyon, local officials said.

The precise nature of the device was not immediately clear, and there were no claims of responsibility.

But President Emmanuel Macron, in a live interview on YouTube, called it an “attack,” and the Paris prosecutor’s office said it had opened a terrorism investigation.

France has been a target of terrorist plots in recent years, especially in 2015 and 2016, when extremists waged deadly, large-scale attacks.

In the past few years, attacks have been rarer and much smaller in scale. In December, in the eastern city of Strasbourg, five people were killed by a gunman at a Christmas market.

Police and military patrols in urban areas have become routine, especially in crowded shopping areas and at sensitive sites like train stations.

Friday’s explosion occurred in a pedestrian area crowded with people beginning their weekend, not far from Place Bellecour, a large square in the centre of the city popular with tourists and local residents.

Hubert Julien-Laferriere, a lawmaker for the district, told the BFM TV news channel that witnesses saw a young man with a bicycle dropping off a bag in front of the bakery shortly before the blast. He said the man was being sought by police. 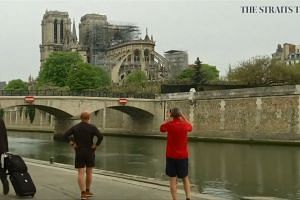 France shaken by blaze that ripped through national icon

Julien-Laferriere said police suspected that the bag was an explosive device that contained nuts and bolts intended to harm people nearby.

Denis Broliquier, the mayor of the borough, told BFM TV that the suspect had been filmed by surveillance cameras in the area.

The news channel later broadcast footage it said was from those surveillance cameras, showing a blurry image of a man wearing sunglasses and pushing a bicycle. It was not immediately possible to verify the footage, which was not released by the French authorities.

Pictures posted to Twitter showed that the front of a Brioche Doree bakery on Rue Victor Hugo had been cordoned off by police, with glass and debris littering the ground. The blast occurred on the central peninsula between the Saone and Rhone rivers that snake through the city.

Denys Courbier, a doctor who works nearby, told BFM TV that he heard an “absolutely huge noise”.

“I went to my window to see, and I saw that in front of the Brioche Doree, all of the glass in the front window had shattered,” he said.

Christophe Castaner, France’s interior minister, said on Twitter that he had asked authorities around the country to “reinforce security at public sites and at sporting, cultural and religious events”.

Lyon police said two metro stations near the site of the blast had been closed until further notice.

The explosion comes just before French voters go to the polls in elections for the European Parliament.