ROME (REUTERS) – At least 14 people, including five Israelis, died and a child was seriously injured on Sunday (May 23) when a cable car linking Italy’s Lake Maggiore with a nearby mountain plunged to the ground, officials and rescuers said

The Stresa-Mottarone cable car takes tourists and locals from the town on Lake Maggiore, almost 1,400m above sea level to the top of the Mottarone mountain in 20 minutes.

Israel’s Foreign Ministry said in a statement that it had been informed by Italian authorities that five of its nationals were among the dead and one Israeli was in a critical condition.

“We are devastated, in pain,” Ms Marcella Severino, Stresa’s mayor told national broadcaster RAI, while Italian Prime Minister Mario Draghi voiced his condolences to the families of the victims, “with a special thought” for the injured children.

The accident happened as the cable car was travelling up the mountain, with the cabin falling to the ground and rolling several times down the steep slopes before it was stopped by trees, Ms Severino said.

People hiking on the mountain heard a loud hiss just before the crash, the mayor said, adding that it was believed to have been caused by one of the cables breaking.

A call came just after midday (6pm Singapore time), Italy’s alpine rescue service said, adding that the cable car was “crumpled” in the woods and two children had been taken by helicopter to a paediatric hospital in the nearby city of Turin.

Ms Severino told SKY television that some of the victims had been found trapped inside the car, with others thrown out into the woods.

Another injured person, an adult, had been also been taken to the hospital by helicopter, she added.

Coroners had started identifying the victims, who included foreign nationals, she said, without giving further details.

Mr Luca Cari, a fire brigade spokesman, said it was still not clear how many people were in the cable car.  “Our teams are still pulling bodies out,” Mr Cari added.

The Stresa-Mottarone lift had only recently reopened following the gradual lifting of coronavirus restrictions.

The Mottarone peak is popular among tourists because of its panoramic views on Lake Maggiore and its picturesque islands as well as the vista of the surrounding Alps.  The cable car service first opened in August 1970 after almost three years of works to replace a cog railway, its website said. 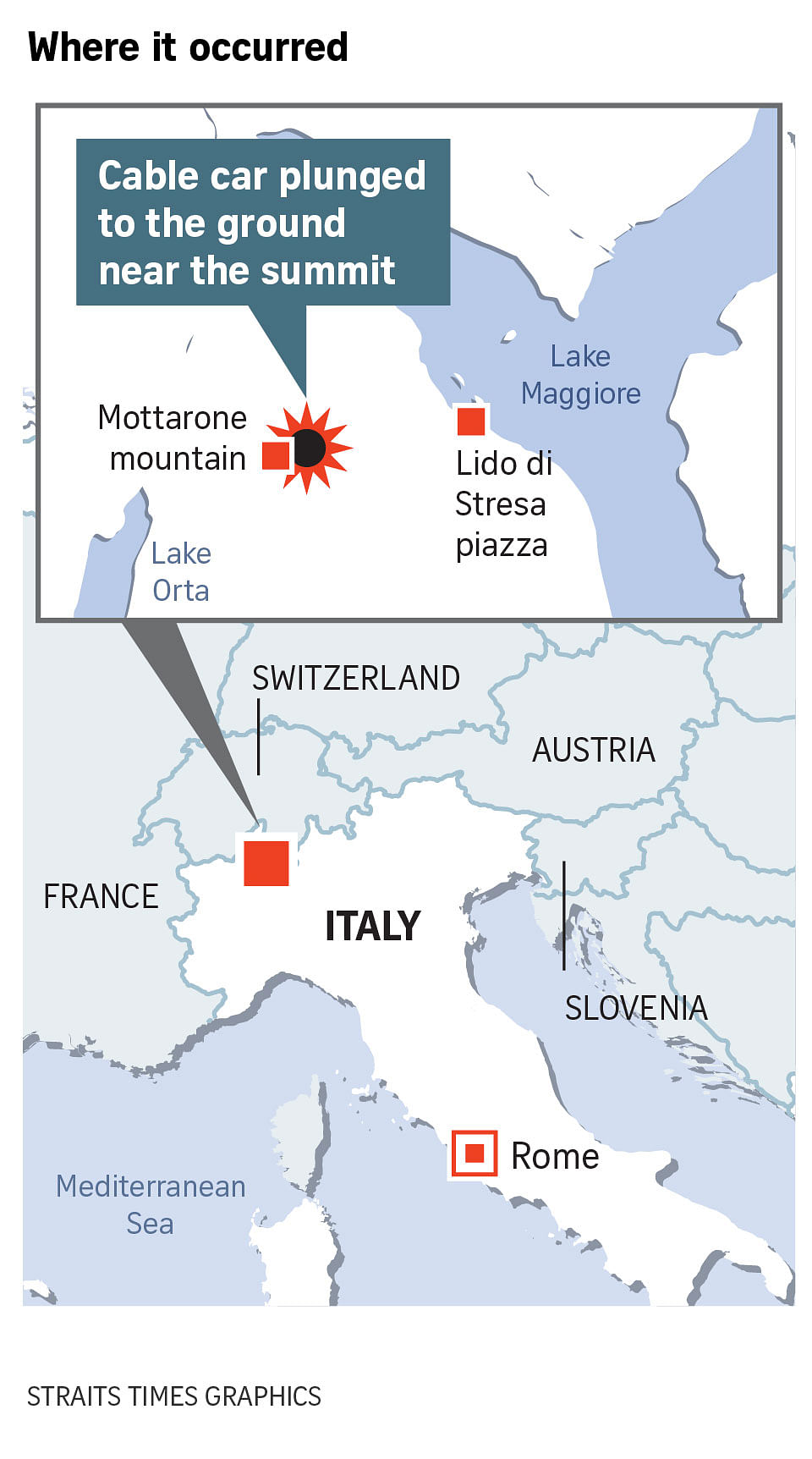 The dual cable system is split into two sections, just over 2km between Stresa and Alpino and another 3km between Alpino and Mottarone. It consist of two cars - in alternate directions – with each one carrying up to 40 passengers, it added.

Ms Severino said that important maintenance works, including changing the cables, had been carried out in recent years.  “All of this is hard to believe,” she said.