LONDON (THOMSON REUTERS FOUNDATION) - Asylum seekers in Italy have rallied to help survivors of the earthquake that killed at least 250 people in Italy, donating money and helping to clear up after the disaster, charity workers said on Thursday (Aug 25).

In the southern region of Calabria more than 70 refugees and asylum seekers gave up a daily allowance for personal expenses of 2 euros (S$3) to help survivors.

"Pictures and video of the earthquake made them think of the wars and disasters they fled from," Giovanni Maiolo, local coordinator of the Sprar project (Protection System for Refugees and Asylum Seekers) told the Thomson Reuters Foundation.

The death toll could rise further with rescue teams working for a second day to try to find survivors under the rubble of flattened towns. 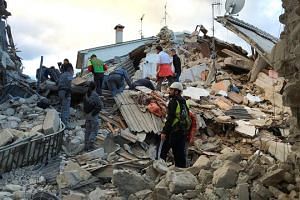 In Arquata del Tronto, where the quake killed almost 50 people, Abdullai, an asylum seeker from Benin, has been helping with the clear-up work.

It was the first earthquake he experienced and realising the devastating consequences, he decided to do something to help the survivors, Abdullai, who only gave his first name, said.

"At first, I was very scared," the 20-year-old told the Thomson Reuters Foundation by telephone. "Then I understood that they needed as much help as possible, and I want to do my part."

He is part of a group of 17 asylum seekers who have spent the day weeding and cleaning an area designated to be an emergency operations centre.

"I am a bit tired," Abdullai said, who arrived in Italy a year ago after leaving Benin because of ethnic and religious discrimination.

"But helping these people makes me feel very strong too. This work is much more beautiful than a paid job, and I'll come back as soon as possible," he said.

Letizia Bellabarba, a coordinator of GUS, a charity that hosts asylum seekers, said they had come up with the idea themselves. "They said that Italy welcomed and helped them, and it was now their turn to help Italians," she said.

About 50 asylum seekers hosted by GUS in the area came forward, and they will be working in groups of 15 or 20 per day, coordinated by Italy's Civil Protection Department.

Centri Damasco has also offered to host 100 people displaced by the quake.

With a rescue effort that involves thousands of people and millions of euros, these gestures may seem a drop in the ocean, but their value goes beyond their tangible impact, Maiolo said.

"We hope that the kind of initiatives help fight stereotypes and misconceptions about refugees and migrants," he said.