BRUSSELS (NYTIMES) - As tensions between Washington and Teheran escalate, European leaders find themselves in an uncomfortable place they have feared being in ever since United States President Donald Trump pulled out of the Iran nuclear deal 13 months ago and restored punishing sanctions against Teheran.

While the Europeans want to preserve the deal - which they see as important for their own security and for the stability of the Middle East - they are basically powerless in the face of US military and financial clout.

Iran is calling on Europe to solve its economic problems brought on by the sanctions or face a collapse of the nuclear deal as it begins to exceed limits on uranium enrichment.

But Washington wants the Europeans to join in to press Iran to enter humiliating new negotiations to shut down Teheran's nuclear programme entirely, limit its missile programmes and restrict its regional ambitions.

The last thing the Europeans want is to declare Iran out of compliance. That would kill the deal and be deeply distressing for a continent already in conflict with the Trump administration over trade, climate change, military spending and multilateralism generally.

So, caught in the middle, the Europeans have been reduced to calling for restraint and de-escalation while both Washington and Teheran seem set on raising tensions - risking a conflict that, by accident or design, could burn the Middle East and disrupt the world's energy supplies.

Iran is threatening to surpass a limit on its stockpiling of enriched uranium in the next several days and to start enriching that uranium to higher levels on July 7 if the Europeans do not grant relief from sanctions. The Europeans deeply resent the pressure but are nonetheless racing to finally get a weak barter system in place to allow at least some trade with Iran. 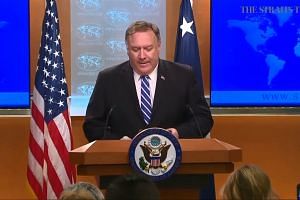 But the barter mechanism, known as Instex, will not give Iran what it wants.

It is designed for humanitarian goods and supplies, which are not covered by the sanctions in any case. And there is no indication that any major European company will risk coming under US sanctions for a bit of barter trade with Iran.

"The Europeans very clearly are not going to deliver on the economic front," said Mr Jeremy Shapiro, a former State Department official now with the European Council on Foreign Relations. "Even if they manage to get Instex functioning, after trying for a year, it won't do for the Iranians what they want it to do", which is to make up for US sanctions.

The Europeans are stuck in the middle, said Mr Guillaume Xavier-Bender, an Iran analyst with the German Marshall Fund in Brussels, "and it's unfortunate, since they initiated the deal in the first place",

But, he added, "they believe so much in the value of the deal, it's difficult for them to think a bit outside it."

Instead of concentrating their diplomatic efforts on the current danger, which is not a nuclear-armed Iran but a conflict by accident or design in the Middle East, "Europeans are focusing on the deal and trying to find crazy creative financial initiatives to keep it alive, but it won't be enough".

"Iran has been a consistent priority for Europe since 2003," said Ms Aniseh Bassiri Tabrizi, an Iran expert at the Rusi, a defence research institute. But European options to save the deal are "very limited", she said, now that Iran's oil exports are cut and there is conflict in the Gulf of Oman.

While Europe could help a little with financing, she said, it cannot help with oil exports.

Iran felt it was not getting what it was promised economically from the deal even before Mr Trump pulled out and reimposed sanctions. Now, the situation is much worse, with Iran's economy in a deep recession and great pressure on those who negotiated the deal, like President Hassan Rouhani, to retain power and influence with the country's supreme leader, Ayatollah Ali Khamenei.

Still, European officials say that the attacks on oil tankers in the Gulf of Oman, which many privately accept are the responsibility of Teheran, were carefully judged messages of impatience and even pleas for help from an Iran that is suffering badly from the sanctions.

The attacks, in May and last week, have served to energise the Europeans, who have sent high-level delegations to Iran to try to get Instex working.

"I think Iran has made a response, and not a particularly radical or extreme response, to what it sees as US escalation in the Gulf," said Ms Nathalie Tocci, an adviser to European foreign-policy chief Federica Mogherini. "The European role should be to attempt to reverse this vicious cycle and ensure that Iran sees an interest in living up to its side of the bargain even with the US violating it."

Now, with Iran's new deadline threats, European officials say they are working to get at least one Instex deal done quickly, as an effort to get Iran to stay within agreed limits.

On Monday (June 17), after a meeting of European foreign and defence ministers, Ms Mogherini made it clear that Europe was not eager to find Iran in breach of its obligations. Iran's announcements were merely "policy dialectics," she said, and Europe would wait for the International Atomic Energy Agency (IAEA) to declare if and when Iran is violating the deal. The last agency report, from the end of May, found Iran in compliance.

"Europe will assume that Iran is abiding by the nuclear deal until the IAEA says it isn't, even when Iran is saying it's not," he said. "It just points to the difficulty the Europeans have been put into."

Given Iran's history of negotiation, Mr Xavier-Bender thinks it likely that Teheran could stay at the threshold of the deal's limits for months, "since they don't want to poke the bear too much". But, it "puts European diplomacy in a very difficult position", he said. "There's not much more Mogherini can say now; she can't say that she agrees with the US and can't openly support the Iranian government either."

Iran seems to understand the game, said Ms Ellie Geranmayeh, an Iran expert with the European Council on Foreign Relations. The limits on stockpiles are less important than those on the level of enrichment, which reduce the time it would take to create enough nuclear material for a bomb.

She suggested that Iran was likely to move in calibrated stages towards higher enrichment, creating pressure on Europe and other signatories, like China and Russia, but without setting off the pact's dispute resolution mechanism.

"Europe is still debating what to do," Ms Geranmayeh said. "But for how long? The political mood in Brussels is souring day by day, US pressure will increase with small escalations in the region and Washington will pressure the EU to bring Iran to the Security Council."

China, a Security Council member, is also a player to watch.

As a signatory and supporter of the nuclear deal and Iran's largest buyer of oil, and in the middle of its own significant trade tensions with Washington, Beijing is thought to be quietly working on a way to continue buying Iranian oil despite the US sanctions, Mr Xavier-Bender said.

"The Iranians are not trying to figure out what to get away with without angering the Europeans," he said. "They're playing the same game they did in 2003, which is what every country does, which is trying to get closer to a nuclear weapon without retaliation."

"The main thing that US withdrawal and sanctions and the confrontation in the Gulf have done is to dramatically increase the incentive for Iran to get a nuclear bomb," Mr Shapiro said. "They think about having a capability, because they believe they need it."