GENEVA (AFP) - The World Health Organisation (WHO) warned on Friday (Jan 17) that a dire lack of new antibiotics was threatening efforts to curb the spread of drug-resistant bacteria, which kill tens of thousands of people each year.

The United Nations health agency published two new reports revealing that there are few new effective antibiotics in the pipeline, meaning that the world is running out of options for fighting so-called superbugs.

"Never has the threat of antimicrobial resistance been more immediate and the need for solutions more urgent," WHO chief Tedros Adhanom Ghebreyesus said in a statement.

"Numerous initiatives are under way to reduce resistance, but we also need countries and the pharmaceutical industry to step up and contribute with sustainable funding and innovative new medicines," he said.

An estimated 33,000 people die in Europe every year from such drug-resistant bacteria, according to European Union data, while the United States estimates that the death toll there is around 35,000.

"We see that this is spreading and we are running actually out of antibiotics that are effective against these resistant bacteria," Dr Peter Beyer, of WHO's essential medicines division, told reporters in Geneva.

"This is one of the biggest health threats that we have identified," he said.

Discovered in the 1920s, antibiotics have saved tens of millions of lives by defeating bacterial diseases such as pneumonia, tuberculosis and meningitis. 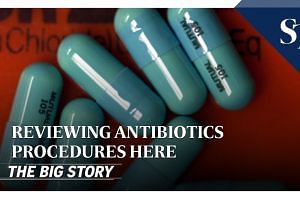 The global fight against antibiotic-resistant bacteria

Superbugs kill one person every 15 minutes in US, says CDC report

But over the decades, bacteria have learnt to fight back, building resistance to the same drugs that once reliably vanquished them - turning into so-called "superbugs".

To counter bacteria's ability to become resistant to known drugs, a steady stream of new antibiotics is needed, but for pharmaceutical companies, developing competitive new products in this field is complicated, costly and not seen as very profitable.

According to the WHO, the 60 new products currently in development - 50 antibiotics and 10 biologics - "bring little benefit over existing treatments and only two target the most critical resistant bacteria", the so-called Gram-negative bacteria.

A range of other drugs still in pre-clinical testing are more innovative, WHO said, but warned it will take years before they reach the market.

Of the 252 such drugs still in very early-stage testing, the two to five first products could become available in about 10 years, according to an optimistic scenario, WHO said.

"It's important to focus public and private investment on the development of treatments that are effective against the highly resistant bacteria," Hanan Balkhy, WHO assistant director-general for antimicrobial resistance, said in the statement.

"We are running out of options."