Mr Francois-Henri Pinault, France's second-richest man, put up an eye-popping €100 million (S$152 million) to rebuild Notre-Dame, just as firefighters were dousing the last flames at the cathedral on Tuesday morning (April 16). Not to be outdone, Mr Bernard Arnault, France's wealthiest scion and a fierce rival to Mr Pinault and to his father Francois Pinault, upped the ante with a €200 million gift a few hours later.

By Wednesday, the government had welcomed some €850 million - more than US$960 million (S$1.3 billion) - offered in the patriotic name of salvaging the cultural treasure, as money from wealthy French families, French companies and international corporations poured in.

But the spectacle of billionaires trying to one-up one another quickly intensified resentments over inequality that have flared during the yellow vest movement, just as President Emmanuel Macron was looking to transform the calamity into a new era of national unity. There were accusations that the wildly rich were trying to wash their reputations during a time of national tragedy.

"Can you imagine, 100 million, 200 million in one click!" said Mr Philippe Martinez, head of the militant CGT labour union. "It really shows the inequalities in this country... If they're able to give dozens of millions to rebuild Notre-Dame, they should stop telling us that there is no money to pay for social inequalities."

"Victor Hugo thanks all the generous donors ready to save Notre-Dame and proposes that they do the same thing with Les Miserables," he wrote on Twitter, referring to another one of Hugo's famous novels, about the lives of the poor. 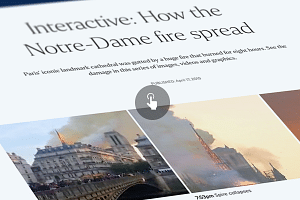 She said the donors' list "looks like the rankings of companies and people located in tax havens".

She added: "I want to tell them: Start by paying your taxes. That will add to the state culture budget."

The bickering was about as far as possible to imagine from the image of a united France the President painted when he gave a national address on Tuesday. Mr Macron said "it is up to us to transform this catastrophe" into a moment to become "better than what we are".

The firestorm began when Mr Jean-Jacques Aillagon, a former culture minister and now adviser to Mr Pinault's father, went on Twitter after Mr Francois-Henri Pinault announced his gift on Tuesday to suggest that corporate contributions to Notre-Dame's restoration be given a 90 per cent tax deduction, rather than the 60 per cent that corporations normally get for charitable contributions.

"That's when the whole thing exploded," said Mr Pierre Haski, a commentator for France-Inter, the public radio station. "That produced outrage, that this act of generosity turns into fiscal advantage."

The reaction was so intense that Mr Aillagon went on the radio on Wednesday morning to retract his suggestion. The Pinault family then announced that they would seek no tax deduction at all for the gift.

"It was very revealing about the sensitivity of the whole issue," Mr Haski said, coming in the midst of a great national debate about the yellow vests and their protests against inequality and fiscal privileges.

In general, many are relieved that Notre-Dame still stands, and if there is now €1 billion to reconstruct it, without calling too deeply on an already stretched national budget, that may be enough.

But taxes have been one of the pressing issues in the yellow vest movement, and the one that Mr Macron has had most trouble diffusing.

The protests that began in autumn were originally over a gasoline tax, but morphed into a larger collective outcry over declining living standards that many average French people complained were rooted in high taxes, while the upper-middle classes in the big cities, let alone the rich, were doing just fine. 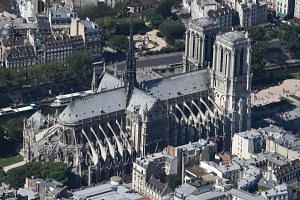 The protesters have lashed out at Mr Macron for favouring the very rich by eliminating a wealth tax, among other inducements as part of his plan to stimulate the economy.

While he has since announced a series of modest tax cuts to help people struggling to make ends meet, he has refused to reinstate the wealth tax, a symbolic slap in the face of the protesters that redoubled their anger.

Ms Ingrid Levavasseur, a founding leader of the yellow vests, said France should "get back to reality".

"There is growing anger on social media over the inertia of big corporations over social misery while they are proving able to mobilise a crazy amount of dough overnight for Notre-Dame," she added.

The companies contributing are among the largest in France, and account for tens of thousands of jobs at home and abroad in the luxury, energy and construction industries.

But for many, they are also symbols of an untouchable class of super-rich who keep getting richer, thanks to a host of fiscal advantages.

Both Mr Arnault and Mr Pinault made their fortunes in the world of luxury - Mr Arnault built the LVMH Louis Vuitton empire, and Mr Pinault's family owns Kering, the second-largest luxury group in France.

The two billionaires' families have been rivals ever since the so-called "handbag wars", when they sparred for control of Italian luxury group Gucci. Mr Pinault's family eventually won.

They have both amassed huge personal fortunes, although Mr Arnault's, which Forbes estimated at €76 billion, far outpaces Mr Pinault's, estimated at a mere €26 billion.

Both families have built up priceless art collections and have scrambled to outdo each other over the years with new museums in France and Italy to house their treasures.

So when the billionaires announced their generous donations to Notre-Dame, critics were quick to note that the ample deductions would be made up for by the French taxpayers. 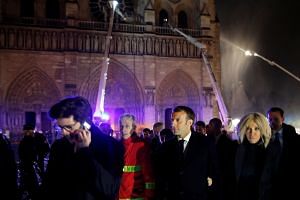 "These billionaires want to pass for heroes," Ms Esther Benbassa, a senator with the Green party, said on Twitter. "They would do better to renounce tax evasion and fiscal optimisation."

In the past, Mr Pinault's father had also declined to take a tax break on the refurbishment of Paris' historic commercial bourse in the centre of Paris, which he is converting into a modern art museum, saying French taxpayers shouldn't foot the bill for his personal spending.

When it looked like other wealthy donors might be able to benefit from a generous tax perk for their largesse, Prime Minister Edouard Philippe sought to douse tensions at a news conference on Wednesday.

"We must be delighted that very low-income individuals, very wealthy individuals as well as companies want to participate in the effort to rebuild a cathedral that is at the heart of our history," he said.

So far, other wealthy donors have stayed mum on the issue. Mr Arnault, who quickly doubled down on Mr Pinault's pledge, has not issued any further statement.

Nor has another wealthy donor, global cosmetics giant L'Oreal. The company's heirs, the Bettencourt-Meyers, announced a €200 million donation for Notre-Dame on Tuesday through the Bettencourt Schueller Foundation.

"Of course, there is reputation washing involved," said Ms Anne-Elisabeth Moutet, a French commentator, who saw the initial gifts as fundamentally sincere.

"There's a muscle memory of Catholicism in France, and it came back," she said. "We're a secular country, but when push comes to shove", religious feelings come forward.

For some French people, like Ms Grace Kitoudi, a customer service representative working in an airport, the issue seemed overblown.

In her view, the yellow vest crisis and the Notre-Dame fire "are two very different debates", she said. "We must not confuse everything. If we can have donations to rebuild this incredible monument, that's all good."