LONDON (REUTERS) - Queen Elizabeth and other senior British royals are trying to thrash out a plan for Prince Harry and his American wife Meghan after a shock announcement that they will step back from their royal roles and spend much of their time in North America.

The couple blindsided the Queen and the other Windsors on Wednesday when they said they wanted to lead a more independent life, which they hoped to finance themselves – a move that one royal source said had hurt and disappointed the family.

Neither Queen Elizabeth, who has devoted her life to public duty since succeeding her father in 1952, nor Prince Charles - Harry’s father and heir to the throne – had been consulted on the announcement, made on Instagram.

“We have chosen to make a transition this year in starting to carve out a progressive new role within this institution,” the statement read.

“We intend to step back as ‘senior’ members of the Royal Family, and work to become financially independent.”

The couple – formally the Duke and Duchess of Sussex – said they had been reflecting for months, and would split their time between Britain and North America to allow them and their baby son the space they needed.

Buckingham Palace was taken aback, saying there had been only preliminary discussions about the couple’s future.

But another royal source said on Thursday (Jan 9) that the Queen, Charles, and Harry’s elder brother Prince William had told senior officials to work, with governments, to help the couple come up with “workable solutions” for the couple, preferably within days, not weeks.

It is not immediately clear how Harry, 35 and sixth in line to the throne, and Meghan, 38, will become what royal biographers said was effectively “half-royal”,  and who will pay for their transatlantic lifestyles.

No senior royal made any immediate public comment on the decision, but British popular newspapers said Charles and William had been furious.

Harry has long been angry at the treatment he and his wife have received from the “tabloids”, and in his announcement said they would reduce media access to their engagements. 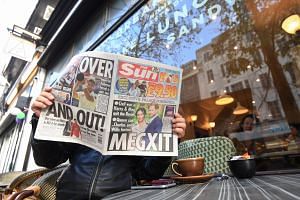 “What really annoys me,” said Arthur Edwards, veteran photographer for the Sun tabloid, “is that you can’t really have your cake and eat it. You can’t one minute be in America or Canada, next minute be in London.

“You know, you are either a member of the royal family or you’re not.”

Daily Mirror royal editor Russell Myers said Harry and Meghan might fall out with the rest of the family: “There will be certain repercussions, I imagine, for everyone involved.”

Prince Charles, for his part, has long sought to slim down the number of senior royals in the public spotlight.

But the haste of the decision raises questions for a family that, in Elizabeth’s words, has had a “quite bumpy” year – not least because of her son Prince Andrew’s decision to step back due to his relationship with the wealthy convicted US sex offender Jeffrey Epstein.

Royal commentators drew parallels with the abdication of King Edward VIII, who gave up the throne in 1936 to marry Wallis Simpson – like Meghan, an American divorcee – and lived out his life in France.

Opponents of the monarchy were scathing.

“Taxpayers will rightly ask who will be funding their overseas lifestyle, their extra security and trips back and forth between here and North America,” said Graham Smith, head of the campaign group Republic, which wants to abolish the monarchy.

'You don't see William and Kate doing this, do you?'
How can Harry and Meghan be half-royals?

Meghan, who acted in the TV legal drama Suits, could return to acting in the United States, though it is unclear how the Palace would view that.

“Perhaps she’d have to be careful about what roles she’d do because she is a member of the royal family – so she couldn’t do too many racy sex scenes, for instance,” said royal biographer Penny Junor.

Harry and Meghan married in May 2018 in a lavish but lively ceremony in Windsor Castle that was heralded at the time as a sign of a more modern monarchy.

Yet their relationship with the media turned sour as they struggled to deal with the intense scrutiny it brought.

Harry, who has never hidden his discomfort with his royal role, and his brother bitterly remember how the press hounded their mother, Princess Diana, who died in a car crash in Paris in 1997 while being chased by paparazzi.

Newspapers have criticised Harry and Meghan’s use of private jets while promoting environmental causes, and the 2.4 million pound taxpayer-funded renovation of their home.

In October, the couple began legal action against some tabloid newspapers in October over historic phone-hacking and invasion of privacy.

Harry described the treatment of his wife as “bullying”, and likened it to that of his mother.