BERLIN (REUTERS) - US President Barack Obama called German Chancellor Angela Merkel an “outstanding” ally on Thursday (Nov 17) and said she might get his support if he were a German citizen and she decided to run for a fourth term as leader of Europe’s largest economy.

Merkel, whom many expect to stand again, declined to show her hand, despite Obama’s words of support. She said she would announce her decision at the appropriate moment, but “that is not today”.

“Chancellor Merkel has been an outstanding partner,” Obama told reporters in Berlin when asked if he wanted her to run again, praising her integrity and their shared core values. 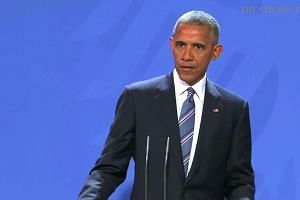 Obama in Berlin urges Donald Trump to ‘stand up to Russia’

Merkel told a joint news conference that it was difficult to say goodbye to Obama after their close partnership over the past eight years. “The parting is hard for me,” she said, before adding that the US constitution limited a president’s time in office to a maximum of eight years and that she had to accept this.

Obama smiled at journalists and winked.

He said Merkel faced “big burdens” if she chose to run again. “I wish I could be there to lighten her load somewhat, but she is tough.”

Merkel, in power since 2005, is expected to announce on Sunday whether she will run for chancellor again in next year’s federal election, the Redaktionsnetzwerk Deutschland media group reported on Wednesday.

Close Merkel aides have said she is moving towards another run, and one lawmaker in her conservative party this week told CNN that she would definitely put herself forward.

A poll conducted for German broadcaster ARD, released on Thursday, showed Merkel’s conservatives would get 32 per cent of the vote if the elections were held on Sunday, down one percentage point from a poll taken on Nov 3.

The centre-left Social Democrats, junior partner in her “grand coalition,” would get 23 per cent, up one percentage point from the last poll, while the pro-environment Greens would get 13 per cent, also up one point, the poll conducted by Infratest dimap showed.

The anti-immigrant Alternative for Germany (AfD) party dropped one percentage point to 12 per cent.