PARIS (AFP) - A huge clean-up operation was under way in Paris on Sunday (Dec 9) after French "yellow vest" demonstrators clashed with riot police in the latest round of protests against President Emmanuel Macron, but a heavy security deployment averted a repeat of last week's destruction.

Protesters nonetheless set fire to cars, burned barricades and smashed windows in pockets of violence across the city centre, clad in their emblematic luminous safety jackets, as armoured vehicles rolled through the streets.

The embattled president - whose name rang out across the Champs-Elysees as protesters shouted "Macron, resign" - is expected to address the demonstrations in a much-anticipated speech in the coming days.

Clashes broke out in cities across France, including Marseille, Bordeaux, Lyon and Toulouse, during a fourth weekend of nationwide protests against rising living costs and Mr Macron in general.

A total of 1,723 people were arrested, the interior ministry said Sunday.  Of these, 1,220 were ordered held in custody, it said. Some 136,000 people took part Saturday’s protests, around the same number as on Dec 1.

It was Paris which again bore the brunt of the violence and destruction. "Dozens of shopkeepers have fallen victim to hooligans," Paris Mayor Anne Hidalgo tweeted. "Once again, this is deplorable."

Police in Paris said they made 1,082 arrests on Saturday, up sharply from 412 in the previous round.

Thick plumes of black smoke from fires rose high into the sky as police fired tear gas, while numerous shops and a Starbucks cafe were ransacked.

"The weather is crap and so is this government," a handful of protesters chanted as light rain began to fall. It turned to downpours by mid-evening, scattering many of the remaining demonstrators.

The outbreaks of violence were on a smaller scale than the destruction and looting of a week earlier, when some 200 cars were torched in the worst rioting in Paris in decades.

The government had vowed "zero tolerance" for anarchist, far-right or other trouble-makers seeking to wreak further havoc at protests that have sparked the deepest crisis of Mr Macron's presidency.

"The dialogue has begun and it must continue," Mr Philippe said. "The president will speak, and will propose measures that will feed this dialogue."

Police reinforcements were boosted to 8,000 across the city, with armoured vehicles deployed in Paris for the first time.

Shops along the Champs-Elysees and central department stores stayed shut with their windows boarded up to avoid looting.

The Eiffel Tower, major museums and many metro stations were also closed as parts of Paris went on effective lockdown.

More than 670 protesters were detained in the capital, many of them stopped as they arrived at train stations or meeting points carrying hammers, petanque balls and other potential missiles.

The authorities also launched an investigation into social media activity from accounts allegedly drumming up support for the protests, sources told AFP.

According to Britain's Times newspaper, hundreds of online accounts linked to Russia were used to stoke the demonstrations.

Citing analysis by New Knowledge, a cyber-security company, the Times said the accounts spread disinformation and used pictures of injured protesters from other events to enhance a narrative of brutality by French authorities. 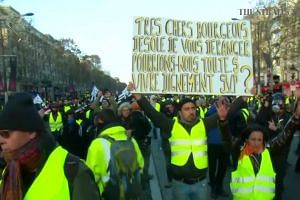 In Paris, health authorities said 179 people had been admitted to hospital, mostly with minor injuries.

Among the police, 17 were hurt, Interior Minister Christophe Castaner said.

The movement has spread beyond France's borders, with around 400 arrested at a "yellow vest" event in Brussels on Saturday and peaceful demonstrations taking place in Dutch towns.

"Very sad day & night in Paris. Maybe it's time to end the ridiculous and extremely expensive Paris Agreement and return money back to the people in the form of lower taxes?" he tweeted.

The demonstrations are not directly linked to the 2015 Paris climate agreement, which Mr Trump has abandoned to the dismay of Mr Macron and other Western leaders.

People began blockading French roads on Nov 17 over rising fuel prices - partly due to taxes aimed at helping the country transition to a lower-carbon economy.

But the demonstrations have since swollen into a broad movement against former banker Macron, whom the protesters accuse of favouring the rich.

Nationwide, 89,000 police officers were on duty in towns, cities and on numerous motorways which caused havoc on France's road network, including a blockade of a border crossing with Spain.

Mr Macron last week gave in to some of the protesters' demands for measures to help the poor and struggling middle classes, including scrapping a planned increase in fuel taxes.

That climbdown marked a major departure for a president who had vowed, unlike predecessors, not to be swayed by mass protests.

But many of the "yellow vests" are holding out for more. A popular demand is a reversal of his decision to slash taxes on France's wealthiest in a bid to boost investment and create jobs - something he has so far ruled out.

The policy, along with hikes on pensioners' taxes, cuts in housing allowances and a string of comments deemed insensitive to ordinary workers, has led critics to label Mr Macron a "president of the rich".

Far-right leader Marine Le Pen - who is backed by some protesters from "forgotten" provincial France, but by no means all - called for Mr Macron to "recognise society's suffering and deliver immediate, very strong responses".

Protests at dozens of schools over university reforms, and a call by farmers for demonstrations next week, have added to a sense of general revolt in France.