MILAN (REUTERS) - Noticing bald and badly grown patches of grass near his home, 13-year-old Nikita Shulga co-founded a project in Ukraine that turned food scraps from his school canteen into organic fertiliser to create healthy soils.

British student Ayrton Cable was only eight when he learnt about homelessness, putting him on a path to activism and establishing the Water, Air, and Food Awards (WAFA) for young people.

Giorgia Mira, 16, was mocked when, inspired by Swedish climate activist Greta Thunberg, she started climate protests outside her school in southern Italy, but believes she is slowly changing the minds of both her peers and teachers.

They are among the nearly four dozen teenagers who called on adults to solve the problems of climate change and hunger without further delay at a four-day food industry conference this week in the Italian city of Milan.

"We should solve these problems, not close our eyes... because if you don't do it, then nothing changes," Sophia-Christina Borisyuk, 13, Nikita's former classmate who co-founded the composting project, told the Thomson Reuters Foundation.

"If we don't do anything, after 200, 300 or even 100 years, we all die because we use a lot of minerals and other resources but we don't replenish," added Nikita, whose project has spread to 200 schools all over Ukraine.

Their goal is to get all of Ukraine's 17,000 schools to produce their own compost. 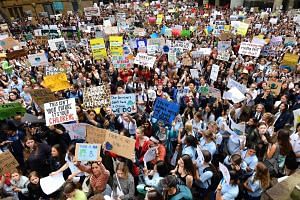 'You can't silence us': Student climate protesters say it's time to save the planet before it's too late

"We calculated that each school produces one tonne of organic scraps every year. If all schools compost this waste, our landfills will decrease in size, our soil will see big increase in fertility, and our air quality will improve," said Sophia-Christina.

Youth activism has been under the spotlight since Greta, 16, shot to prominence last year for weekly protests on the cobblestones in front of Stockholm's Parliament House, holding a "school strike for climate" sign.

Thousands of students around the world have since copied her protest for climate action, and youth organisations have launched strikes involving students in more than 40 countries.

"These few years are crucial... action needs to be taken now," said Ayrton, now 16, referring to scientists' warning that the world has about 12 years left to clean up its energy system or face potentially catastrophic consequences.

WAFA Youth has engaged 100,000 students from more than 1,000 schools in 12 countries to look at issues around water security, said Ayrton, who has campaigned against wide-ranging issues including hunger, factory farming and cyber bullying.

This included students checking and calculating how much water is wasted in a day through pipe leakage and taps, and making them understand the magnitude of the problem and then how to solve it, he said.

Reducing the amount of water wasted through old, leaky pipes is also an activity that Giorgia, from the southern Italian city of Bari, wants city officials to work on.

Thousands of young people protest for climate action in Belgium

It is part of an action plan drawn up by the local branch of Greta's global movement "Fridays For Future", to manage natural resources better.

"We also propose to plant a new tree for every kid born in the city" because Bari has very few green areas, said Giorgia, who continues her daily climate protests but said she wanted to broaden the topic.

They recently organised a meeting on the links between climate change and immigration.

"If you look at the big challenges we have - to feed the growing population with less inputs, protect the environment, and change our behaviour as consumers - it is important that we have, if I can say, this disruptive behaviour," she said.