PARIS (AFP) - A French court on Wednesday charged Paris attacks suspect Salah Abdeslam over his role in the November 2015 carnage that left 130 dead, just hours after his extradition from Belgium.

Abdeslam, a French national of Moroccan origin who grew up in Belgium, is believed to be the last surviving member of a terror squad that hit cafes, a concert hall and the national stadium in Paris on November 13.

More than a month after his capture in Belgium, Abdeslam was brought to France by helicopter early on Wednesday where he was formally placed under arrest before being swept off to the main Paris court, where he spent several hours.

His lawyer Frank Berton said that investigating judges charged him with murder, association with a terrorist group, possession of weapons and explosives as well as sequestration over the hostage-taking at the Bataclan concert hall where 90 were killed. 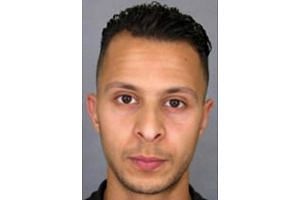 Berton said his client was not interrogated at length.

"He explained to judges that in light of the hour he was removed from the jail (in Belgium) this morning, he prefers to explain himself later, but insisted that he will explain himself," said Berton.

Another hearing has been set for May 20, the veteran lawyer said, adding that his client was being held in the sprawling Fleury-Merogis prison complex outside of Paris.

Justice Minister Jean-Jacques Urvoas said the suspect would be placed in isolation and monitored by "hardened guards" skilled in handling dangerous detainees.

Jean Reinhart, a lawyer for about 30 families of the attack victims, hailed the extradition, saying "justice is on its way".

Another lawyer for the victims' families, Samia Maktouf, said she hoped Abdeslam would "give elements that would allow the identification of the recruiters and financiers of the terrorist network he belonged to".

Abdeslam was arrested in Brussels on March 18 after four months on the run as Europe's most wanted man.

Prosecutors believe he was in charge of logistics for the Paris attacks, as he rented cars and hotel rooms used by the Islamic State group attackers.

His brother Brahim detonated his suicide vest in a bar, and Abdeslam himself said he had been expected to do the same outside the national stadium, but had backed out at the last minute.

After revealing that nugget of information in his first interrogation, Abdeslam has since clammed up.

Police have uncovered clear links between Abdeslam and the three Brussels suicide bombers, but he has said through his Belgian lawyer that he knew nothing about the attacks.

Last month, Belgian police arrested another key Paris suspect called Mohamed Abrini, who was seen with Abdeslam before the attacks, and who also turned out to be the so-called "man in the hat" seen in CCTV footage with two bombers shortly before they staged the Brussels airport assault.

Abrini grew up with Abdeslam in the gritty Brussels suburb of Molenbeek along with several other suspects, who all share a similar history of brushes with the law and radicalisation.

His Belgian lawyer Sven Mary gave a lengthy interview to the Liberation newspaper that appeared on Wednesday, describing the difficulty of representing such an infamous client.

"There have been moments when I thought of giving up. If I had known about the Brussels attacks, maybe I would never have taken this case," Mary said.

He described his client as a "little moron from Molenbeek, more a follower than a leader. He has the intelligence of an empty ashtray. He is the perfect example of the GTA (Grand Theft Auto video game) generation who thinks he lives in a video game.

"I asked him if he had read the Koran, and he replied that he had researched it on the Internet." The attacks suspects should be judged by an "international criminal court," he said.

"These people committed acts of war." Mary said he had spoken to Abdeslam seven or eight times and he still was unsure how his client had ended up radicalised.

"A year and a half ago he was clubbing in Amsterdam. The only explanation I can find is that it was Internet propaganda that gave the impression that Muslims were unfairly treated," he told Liberation.

Mary blames Paris prosecutor Molins for his client's silence since he was first questioned.

Molins revealed the contents of the interrogation to French journalists, and Mary filed a complaint against him for doing so.

"I think Salah Abdeslam is of capital importance to this investigation. I would even say he is worth gold. He cooperates, he communicates," Mary said.