PARIS (WASHINGTON POST) - She was walking on a Paris street when it happened, not far from her home. In a scene that has shocked an entire nation, a man approached her in broad daylight, struck her in the face and somehow managed to get away.

Marie Laguerre, a 22-year-old architectural student, released CCTV footage of the incident on her personal Twitter account. It shows Laguerre rounding a corner on July 24, trailed shortly thereafter by a man who is clearly saying something to her, although the video has no audio component.

Laguerre keeps walking, but she eventually stopped to confront the man, turning to look at him. He strikes her in the face, directly in front of a cafe terrace where a handful of people sit talking and smoking. The timestamp on the footage reveals that the confrontation took place just after 6.30pm - nearly three hours before sunset.

The man - who hasn't been identified - got away, but prosecutors have since opened an investigation. Laguerre, however, took to social media to transform her experience into the latest illustration of the dangers that target women even in the most innocuous of public spaces.

The brutal scene has scandalised a nation already in the throes of cracking down on sexual harassment - especially catcalling in the streets.

In March, the French government approved immediate fines starting at €90 (S$140) for anyone caught sexually harassing a woman on the street or on public transportation. But as government spokesman Benjamin Griveaux admitted at the time, the challenge would be identifying and apprehending offenders. Laguerre's case has only underscored that challenge. 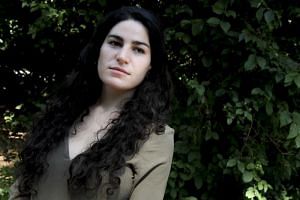 In the meantime, a host of politicians have spoken out in favour of Laguerre.

"It's intolerable that in France, in 2018, women are hit in the street because they refuse to be insulted as they walk. It is a fundamental question of liberty," said Marlène Schiappa, France's gender equality minister, speaking of France's BFM Television. Schiappa was the lead advocate of a crackdown on catcalling.

Late last year, a French version of the #MeToo movement gained significant traction, a notable development in a culture with traditions of both machismo and flirtation. #Balancetonporc (or "squeal on your pig") saw French women out their harassers on social media - often identifying them by name.

Some French feminists, however, including a number from an older generation, criticised the movement because, in their interpretation, it somehow sought to police sexuality. In a controversial January 2018 open letter to Le Monde newspaper, they argued to preserve what they called "the right to annoy."

But Laguerre's case shows what such an "annoyance" can mean.

"Seeing his behaviour, I knew he was going to hit me," she told France's Le Parisien newspaper, noting that the man, who seemed to be in his 30s, had grunted at her and insulted her beforehand.

"It (the blow) bumped hard against my head but I stayed upright and dignified the best I could."