MALAGA, SPAIN (WASHINGTON POST) - Out for an afternoon in the Spanish countryside, Julen's parents were preparing lunch when their two-year-old slipped into a hole.

They heard the toddler's echoing cries as he plummeted into darkness - more than 30 storeys deep - then silence.

That silence has consumed the country of 46 million people as a legion of rescuers contends with two crucial questions: How can they reach the two-year-old? And, is it already too late?

The tragedy happened as the family of three - Julen, whose name has also been spelled "Yulen", and his parents, Jose Rosello and Vicky Garcia - were setting up for a paella picnic with friends in Totalan, a small town on the southern coast of Spain, according to Britain's Daily Express.

Julen went into a possibly unmarked hole bored by someone searching for a spot to dig a well, the authorities have said.

The hole is over 100m deep, but only 38cm at its widest spot - big enough for a toddler to slip into, but not for his parents or rescuers racing against a ticking clock.

Videos and photos of the scene showed a harness-wearing rescue worker crawling into the mouth of the hole, supported by a cable. 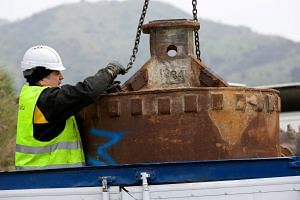 On Monday, officials lowered a small robot into the hole. It recovered a bag of candy and a plastic cup the boy had been holding when he fell, but it was not able to capture any videos or sounds of the missing child.

According to the Daily Mail, there is a blockage some 75m beneath the surface, perhaps caused by a mini landslide as the boy tumbled. At about that depth the hole gets slimmer, too small for even the robot to get past.

The authorities spent the past two days working on multiple plans to get to the boy. They are trying to determine whether they can safely widen the hole, to let a robot, or possibly a rescuer, go deeper, Mr Pilar Limon, a spokesman for the Emergencies Coordination Unit, told NBC.

They are also trying to determine whether they can dig a tunnel that intersects the well.

However, they worry about unknown factors that lie beyond the reach of the camera's lens: a plug of sand atop water of an uncertain depth.

Julen's parents, whose first son, Oliver, died of a reported congenital heart defect at the age of three, join a reluctant fraternity of families cast into the glare of an international spotlight after their children were trapped below ground.

In 1987, 18-month-old Jessica McClure fell down a 6.5m hole in her grandmother's backyard in Midland, Texas, and was stuck for 58 hours before rescuers were able to pull her out of the 20cm-wide hole.

And last summer in Thailand, members of the Wild Boars football team - 12 boys, none of whom could swim, and their 25-year-old coach - were rescued from a cave by divers who guided the boys between the ages of 12 and 16 through passages as narrow as 60cm.

In Spain this week, Julen's parents, sequestered in a tent as they await news, prayed for the boy's older brother to watch over him from heaven.

"Oliver, don't forget your brother Julen," his mother wrote on social media, according to the Express. "You know we've been waiting for him for many hours. I know you protect him a lot, my little King."

Later, she posted another picture of a sleeping baby: "If it's true that there's a God up there," she wrote, "help him please."