PARIS (WASHINGTON POST) - The fire that engulfed Notre Dame in Paris on Monday (April 15), severely damaging a building that had stood for more than eight centuries, felt unprecedented.

And in one sense, it was: How else can one describe the gutting of a building that stood witness to so much of Western European history?

But in another sense, Notre Dame is one in a long line of cathedrals that have been ravaged by fire, war or worse.

Construction began on Old St Paul's Cathedral in London, England, (actually the fourth attempt at a church named for Paul in that spot, the previous three having been destroyed) in 1087, the same year much of the city was devastated by fire, and was delayed by a fire in 1135.

It was then destroyed by the Great Fire of London in 1666, at which point the old structure was razed in favour of the new St Paul's, which still stands today.

St Martin's was originally established by Frankish clergy around 630. It was destroyed by Normans in the 9th century, rebuilt in the 10th - and then partially destroyed by fire in 1253.

The cathedral in all its Gothic glory that exists today was put up in 1254. (That isn't to say the building was never tested again. Seven centuries later, in 1964, the central nave collapsed because of a storm.)

In 1914, during World War I, more than two dozen German shells hit this cathedral. The wooden scaffolding was set on fire, which in turn lit the oak of the roof. The lead used to seal the roof melted, which in turn set, for example, the wooden pews on fire. Stained glass windows and pillars and statuary were destroyed.

Reims was restored and fully reopened in 1938.

In the late 14th century, the bishop of Barcelona, Pere Planella, consecrated this cathedral. While the basilica withstood different kinds of turmoil through the ages, nothing, per the cathedral's website, quite compares to July 1936, when Santa Maria Del Mar was set on fire. It burned for 11 days straight. 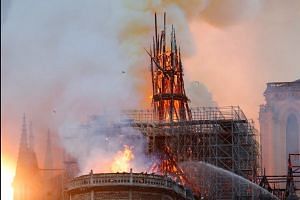 The baroque altar, among other images and archives of historical significance, were destroyed. However, the walls, columns and some of the stained glass windows managed to outlast the flames.

The Cologne Cathedral was tested by multiple wars. In 1794, the Rhineland was occupied by French Revolution troops. The cathedral was used for, among other things, a detention centre for prisoners of war. In 1797 and 1798, prisoners used the nave's wood furnishings for firewood. It wasn't until 1821 that the Archdiocese of Cologne was re-established (although the building was used as a parish church beginning in 1801). Nevertheless, the two towers of the cathedral were completed in the 1860s and 70s.

But the dark days for the cathedral were not over yet. During World War II, the cathedral was damaged by 14 high-explosive bombs and 70 fire bombs. But the mediaeval windows were removed in time, and other treasured items were protected by sandbags. What's more, the cathedral workshop managed to restore the choir and transept in time for the 700th anniversary of the laying of the foundation stone - that is, by 1948.

St Mel's cathedral in Ireland was built in the 19th century. However, as the result of an accidental fire, it burned on Christmas Day in 2009. Five years later, in 2014, it reopened.