Volkswagen, one of the world's most prominent carmakers, has been caught up in a fast-spiralling crisis some have already dubbed "diesel dupe".

Here are nine things to know about the scandal.

1. What is the whole scandal about?

Reports emerged on Sept 19 that Volkswagen had been accused by US regulators of manufacturing vehicles designed to evade government pollution controls. They also demanded that it fix nearly half a million cars.

This is in direct violation of the US Environmental Protection Agency's (EPA) Clean Air Act. 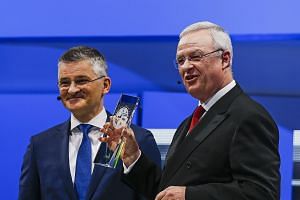 2. How does this device work?

Volkswagen installed a device in the vehicles to evade the clean-air standards. An intricate code used in the device enables it to detect whether the car is being tested for nitrogen-oxide emissions - a key contributor to smog - in a lab. It tracks the vehicle's speed, engine operation, air pressure and foot pedal and steering wheel movements.

The car's pollution controls are then automatically turned on, in what has been called the car's "safety mode". It reverts back to its normal mode once on the road.

Tests done outside of the lab found that the engines in fact spewed out nitrogen oxide pollutants up to 40 times above the limit imposed in the United States.

3. How many cars are affected?

Since 2009, the carmaker has sold an estimated 482,000 clean diesel cars in the US - less than one per cent of the country's car market - which contain the Type EA 189 diesel engine, a type of four-cyclinder turbocharged direct injection (TDI) engine.

The crisis deepened when Volkwagen admitted on Sept 22 that some 11 million clean diesel cars sold across the world were installed with defeat devices. Most of these cars are in Europe.

4. Which models are affected?

5. How was Volkswagen's cheating discovered?

The credit goes to 45-year-old engineer Daniel Carder, who led a five-member research team from West Virginia University in conducting a US$50,000 (S$71,000) study funded by the International Council on Clean Transportation, a non-profit organisation.

The emissions research, which chose the VW Jetta and Passat, as well as the BMW X5, involved road tests around Los Angeles and up the West Coast to Seattle.

Results, made public more than a year ago, generated huge discrepancies in on-road diesel emission levels between the Volkswagen models and the BMW X5.

6. What has been the fallout from the scandal?

The company has gone full throttle in apologising for the scandal - Mr Michael Horn, chief executive of Volkswagen Group of America, admitted it had "totally screwed up", while there is speculation that VW chairman and CEO Martin Winterkorn could be replaced.

Volkswagen has pledged a provision of 6.5 billion euros (S$10.3 billion) in the third quarter to cover the costs of repairing the damage done to both the cars and the company's reputation.

Over the past couple of days, the carmaker's shares have plunged by more than 30 per cent.

7. Are there any further repercussions for the company?

The EPA could fine Volkswagen up to US$37,500 for each car that flouts the emissions standards. This would amount to a total fine of about US$18 billion.

Several countries, including France and South Korea, intend to open their own investigations. German Chancellor Angela Merkel has also urged Volkswagen to assure "full transparency" and "clear up the entire matter".

Local reports also say that the US Justice Department has launched a criminal probe.

8. How is Volkswagen fixing the problem in existing cars?

It is currently working to develop a remedy that complies with emissions standards. Owners need not take any action in the meantime, and can get their cars fixed for free once the remedy is available.

9. Are any of the affected diesel models available for sale in Singapore?

No. Based on information available so far, the National Environment Agency (NEA) said that the cases reported in the US "pertain to models that are not sold in Singapore".

Under Singapore's environmental regulations, the NEA sets minimum exhaust emission standards for all vehicles. More details can be found here.