WASHINGTON (AFP) – United States President Donald Trump and Turkish President Recep Tayyip Erdogan agreed on Sunday (Dec 23) to prevent a power vacuum in Syria after US ground forces withdraw, in a phone conversation days after the US president shocked global partners by announcing that Americans would leave the war-scarred country.

Turkey was a rare ally that lauded Mr Trump’s momentous decision to pull the 2,000 US troops out of Syria, where they have been helping assisting in a multinational fight against the Islamic State in Iraq and Syria (ISIS).

“The two leaders agreed to ensure coordination between their countries’ military, diplomatic and other officials to avoid a power vacuum which could result following any abuse of the withdrawal and transition phase in Syria,” the Turkish presidency said in a statement.

Hours earlier, Mr Trump had tweeted that he and Mr Erdogan “discussed ISIS, our mutual involvement in Syria, & the slow & highly coordinated pullout of US troops from the area”.

Mr Erdogan tweeted shortly thereafter, saying the two leaders “agreed to increase coordination on many issues including trade relations and the developments in Syria”, dubbing the call “productive”.

US troops will leave under the auspices of a new Pentagon chief set to start next month, after Defence Secretary Jim Mattis resigned from the post citing key differences, including on Syria, with the often-impulsive Mr Trump.

An American exit would allow Turkish troops to move against Kurdish fighters in Syria, who have played a key role in the war against ISIS but are deemed terrorists by Ankara. Many US politicians and international allies fear the withdrawal is premature and would further destabilise the already devastated region.

A US withdrawal, said Mr Mutlu Civiroglu, a Kurdish affairs analyst, will open the way “for Turkey to start its operations against the Kurds, and a bloody war will begin".

French President Emmanuel Macron on Sunday said he “deeply regretted” Mr Trump’s decision, and that “an ally must be reliable”.

Several US politicians from both parties rejected Mr Trump’s claim that ISIS had been defeated, and many in the US military expressed alarm and dismay at the thought of suddenly abandoning Washington’s Kurdish partners.

And Mr Trump’s sudden decision sparked turmoil within his administration, prompting the resignation of Mr Mattis as well as of Mr Brett McGurk, the special envoy to the anti-ISIS coalition.

Plans for the troop withdrawal will now be overseen by Deputy Secretary of Defence Patrick Shanahan, who Mr Trump on Sunday said would replace Mr Mattis, starting Jan 1. 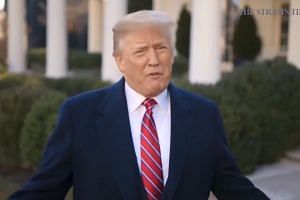 Mr Mattis, 68, had said he would leave at the end of February to allow a smooth transition for the next chief of the world’s top military power – but a reportedly angry Mr Trump accelerated his departure by two months.

Defence spokesman Dana White tweeted that Mr Mattis would still assist in the handover, working with Mr Shanahan to ensure the department “remains focused on the defence of our nation during this transition”.

According to US media, the Republican leader voiced resentment over news coverage of Mr Mattis’ stinging resignation letter that laid bare his fundamental disagreements with the president.

“Because you have the right to have a secretary of defence whose views are better aligned with yours,” Mr Mattis said in the letter, “I believe it is right for me to step down from my position.”

“My views on treating allies with respect and also being clear-eyed about both malign actors and strategic competitors are strongly held and informed by over four decades of immersion in these issues,” wrote Mr Mattis, a decorated former general.

Days later, special envoy McGurk made a similar move, saying he could not support Mr Trump’s Syria decision that he said “left our coalition partners confused and our fighting partners bewildered”.

Unlike Mr Mattis, Mr Shanahan has never served in the military and has spent most of his career in the private sector. He spent over three decades working for aircraft giant Boeing, including as vice-president and general manager of Boeing Missile Defence Systems, before moving to the Pentagon as deputy in 2017.

Until Mr Trump finds a permanent defence leader, Mr Shanahan will lead plans for US troops to leave Syria along with a significant drawdown in Afghanistan, both of which critics worry will leave war-torn regions at risk of continued and potentially heightened bloodshed.

Mr Mick Mulvaney, who will soon leave his post as White House budget director to serve as Mr Trump’s chief of staff, told ABC on Sunday that Mr Trump will not change his mind about the withdrawal, despite last week’s protest resignations.

“I think the president has told people from the very beginning that he doesn’t want us to stay in Syria forever. You’re seeing the end result now of two years’ worth of work.”