The use of the archaic word sparked talk online, with many initially puzzled at what it meant.

Dotard was the top trending word on Twitter on Friday.

Politicians have been credited with popularising certain words.

Here is a look at dotard and other terms that have gone viral:

"I will surely and definitely tame the deranged US dotard with fire," declared Kim in an unusually direct and angry statement published by North Korea's official Korean Central News Agency.

After the statement was published, the term trended on Google and became a popular hashtag on Twitter, with many asking what it meant and others turning it into a meme.

The word meant "imbecile" when it was first used in the 14th century and comes from the Middle English world "doten," meaning "to dote," according to Merriam-Webster.

It appeared in classic literature including Chaucer's The Canterbury Tales and several of Shakespeare's works including The Merchant Of Venice and King Lear.

Chaucer’s Wife of Bath (in the Canterbury Tales) was slinging the insult ‘dotard’ over 600 years ago. pic.twitter.com/ZuZdsvOTf1

- OMG HE CALLED TRUMP A #dotard

In May this year, US President Donald Trump tweeted the following incomplete sentence: "Despite the constant negative press covfefe".

The message remained on the Internet for hours, spurring a wave of speculation about what Trump intended to say, but was later deleted.

Then-White House spokesman Sean Spicer said: ""I think the President and a small group of people know exactly what he meant."

"Covfefe" is likely to be a misspelt version of "coverage", but this has never been officially acknowledged.

Internet users took the term and ran with it, turning it into memes like this one that says: "Ask not what covfefe can do for you, but what you can do for #covfefe".

In 2010, a massive blizzard whirled through the eastern US, buring parts of the region under inches of snow.

Then-president Barack Obama called the snowstorm "Snowmageddon", and the term was picked up and proliferated by news outlets. 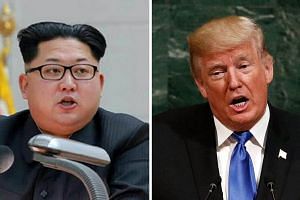 The adjective "iffy", defined by the Oxford dictionary as "doubtful" or "full of uncertainty", was reportedly coined by the 32nd US president Franklin D. Roosevelt in the 1930s.

According to the book Words From The White House, Roosevelt used the term throughout his administration, tossing out the term to dismiss questions at press conferences.

He also called Supreme Court decisions he disagreed with "iffy".

5. Abraham Lincoln is behind the widely used term 'sugarcoat'

The verb "sugarcoat", which can mean to literally coat an item with sugar or to make superficially attractive or acceptable, has not always been in popular use.

Abraham Lincoln, the 16th US president, is credited with popularising the word.

In a message to Congress in 1861, Lincoln wrote: "With rebellion thus sugar-coated they have been drugging the public mind of their section for more than thirty years, and until at length they have brought many good men to a willingness to take up arms against the government."

The official government printer reportedly objected to the use of the term, saying it was beneath the presidency's linguistic dignity, but Lincoln insisted and said: "The time will never come in this country when the people won't know exactly what sugar-coated means."