Waking up to an insect in your ear can be a living nightmare.

And in April, a woman's nightmare lasted nine days - the amount of time it took for doctors to remove a cockroach that had crawled into her ear while she was asleep.

Ms Katie Holley, who lives in Florida, was jolted awake from the insect, and when she inserted a cotton swab into her ear, she pulled out small, dark brown pieces that looked like legs.

Together with her husband, she rushed to a hospital where doctors took 20 minutes to kill and remove the insect.

However, most of the dead cockroach remained in her ear canal, and it was only nine days later that doctors managed to remove the insect completely from her ear.

Insects such as cockroaches burrowing into ears are commonly reported.

Here are some other examples of foreign - and living - objects that have been reportedly found their way into people's ears, nose, and other body parts.

What's worse than having a cockroach lodged inside your ear? Probably the insect entering your body through your nose, and then subsequently making its way inside your head.

A woman in Chennai, India, underwent a 12-hour ordeal with the insect sitting on her skull, between her eyes, in February last year. 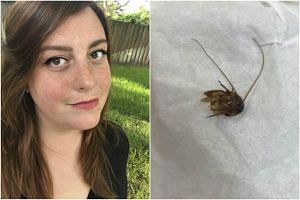 Cockroach crawls into Florida woman's ear, docs take nine days to get it out 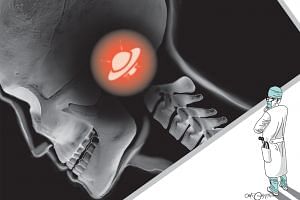 Doc, there's a UFO in my ear

"There was a tingling, crawling sensation. Whenever it moved, it gave me a burning sensation in my eyes," she was quoted as saying by the Times of India.

The cockroach was so determined to make a home out of the woman's head that it reportedly clung on to her nasal tissue even as it was being vacuumed out with a suction apparatus.

It took 45 minutes for doctors to remove the live cockroach from her nose.

Some people really love their pets, but for one woman in Portland, Oregon, having her pet python stuck in her ear gauge was a little too close for comfort.

In January last year, Ms Ashley Glawe posted on Facebook saying that she had to go to the emergency room because her ball python decided to slither into her gauged ear lobe.

A gauged ear lobe, a form of body modification, is an ear piercing hole that has been stretched over time.

"I like froze instantly," the 23-year-old told news station WLS-TV. "I didn't move because I really thought he was like attacking the side of my head."

She tried to use cooking oil to free the snake, but it was futile. Firefighters were also unable to help release the python.

Eventually, Ms Glawe decided to go to the hospital, where doctors cut her ear slightly to remove the reptile.

A tiny spider which found its way into a Chinese woman's ear was so comfortable that it wove a web deep inside her ear canal.

In 2015, it was reported that a woman in Xiamen experienced a persistent scratching noise and intense pain from inside her ear.

The 25-year-old had gone hiking with her boyfriend and picked fruit from a tree. It is believed that the spider had entered her ear after being disturbed by the woman's fruit picking, reported the Daily Mail.

Doctors used medicated ear drops to kill the spider before extracting it.

A man in China found himself in a doubly unfortunate situation when he discovered that a cockroach that had been giving him earaches had given birth to 25 babies.

The 19-year-old from Chang'an had woken up in the middle of the night with a painful and itchy right ear, reported British newspaper The Independent in 2015.

When a doctor examined his ear, he found a female cockroach measuring close to 8mm.

After removing the insect, the doctor found 25 more baby roaches.

It was believed that the female roach had laid the eggs inside the man's ear "several weeks earlier", according to reports.

The doctor reportedly said that if the man had sought medical treatment any later, his ear "would have been destroyed".

A fruit fly larva sought cover in a Taiwanese woman's ear, according to the New England Journal of Medicine in 2014.

The 48-year-old woman visited the hospital for treatment after experiencing severe ear pain for one day.

Upon removing the woman's hearing aid, doctors saw bloody fluid in her ear and a fruit fly larva moving around in her ear canal.

The skin near her eardrum had been eroded due to the larva, which was removed by doctors, according to the report.

It took two weeks for the woman's ear canal to heal.

A 32-year-old woman in Russia lived with a worm inside her face for two weeks.

The parasite, known as Dirofilaria repens, first appeared as a tiny blemish under her eye. As it grew, the worm moved across her face, forming bumps above her eye, before making its way down into her lip.

The woman had reportedly showed symptoms after travelling to a rural area near Moscow, where she was bitten by mosquitoes.

She experienced occasional itching and burning as the worm slithered under her skin.

Eventually, doctors surgically removed the worm from her face and she made a full recovery.