INCHEON, SOUTH KOREA (WASHINGTON POST) - This week, representatives of more than 130 countries and about 50 scientists packed into a large conference centre near the South Korean capital and went over every line of an all-important report with one question in mind: What chance does the planet have of keeping climate change to a moderate, controllable level?

When they couldn't agree, they formed "contact groups" outside the hall, trying to strike an agreement and move the process along. They were trying to reach consensus on what it would mean - and what it would take - to limit the warming of the planet to just 1.5 deg C, when 1 deg C has already occurred and greenhouse gas emissions remain at record highs.

"It's the biggest peer-review exercise there is," said Mr Jonathan Lynn, head of communications for the United Nations' Intergovernmental Panel on Climate Change (IPCC). "It involves hundreds or even thousands of people looking at it."

The IPCC, the world's definitive scientific body when it comes to climate change, was awarded the Nobel Peace Prize a decade ago and has been given what may rank as its hardest task yet.

It must not only tell governments what we know about climate change - but also how close they have brought us to the edge. And, by implication, how much those governments are failing to live up to their goals for the planet, set in the 2015 Paris climate agreement.

Limiting warming to 1.5 degrees is the most stringent and ambitious goal in that agreement, originally put there at the behest of small island nations and other highly vulnerable countries. But it is increasingly being regarded by all as a key guardrail, as severe climate change effects have been felt in just the past five years - raising concerns about what a little bit more warming would bring.

"Half a degree doesn't sound like much till you put it in the right context," said Mr Durwood Zaelke, president of the Institute for Governance and Sustainable Development. "It's 50 per cent more than we have now." The idea of letting warming approach 2 deg C increasingly seems disastrous in this context. 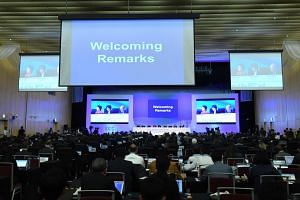 Has climate change threat been underestimated?

Parts of the planet, like the Arctic, have already warmed beyond 1.5 degrees and are seeing alarming changes. Antarctica and Greenland, containing ice sheets which represent many metres of sea-level rise, are wobbling. Major die-offs have hit coral reefs around the globe, suggesting that an irreplaceable planetary feature could soon be lost.

It is universally recognised that the pledges made in Paris would lead to a warming far beyond 1.5 degrees - more like 2.5 or 3 deg C, or even more. And that was before the United States, the world's second-largest emitter, decided to try to back out of the Paris deal.

"The pledges countries made during the Paris climate accord don't get us anywhere close to what we have to do," said Professor Drew Shindell, a climate expert at Duke University and one of the authors of the IPCC report. "They haven't really followed through with actions to reduce their emissions in any way commensurate with what they profess to be aiming for."

The new 1.5 deg C report will feed into a process called the "Talanoa Dialogue", in which parties to the Paris agreement begin to consider the large gap between what they say they want to achieve and what they are actually doing. The dialogue will unfold in December at an annual UN climate meeting in Katowice, Poland.

But it is unclear what concrete commitments may result.

At issue is what scientists call the "carbon budget": Because carbon dioxide lives in the atmosphere for so long, there's only a limited amount that can be emitted before it becomes impossible to avoid a given temperature, like 1.5 deg C. And since the world emits about 41 billion tonnes of carbon dioxide per year, if the remaining budget is 410 billion tonnes, for example, then scientists can say we have 10 years until the budget is gone and 1.5 deg C is locked in.

This is unless emissions start to decline - which gives more time. This is why scenarios for holding warming to 1.5 deg C require rapid and deep changes to how we get energy.

The window may now be as narrow as around 15 years of current emissions, but since we don't know for sure, according to the researchers, that really depends on how much of a margin of error we are willing to give ourselves.

And if we can't cut other gases - such as methane - or if the Arctic permafrost starts emitting large volumes of additional gases, then the budget gets even narrower.

"It would be an enormous challenge to keep warming below a threshold" of 1.5 deg C, said Prof Shindell, bluntly. "This would be a really enormous lift."

So enormous, he said, that it would require a monumental shift toward decarbonisation. By 2030 - barely a decade away - the world's emissions would need to drop by about 40 per cent. By the middle of the century, societies would need to have zero net emissions.

What might that look like? In part, it would include things such as no more gas-powered vehicles, a phase-out of coal-fired power plants and airplanes running on biofuels, he said.

"It's a drastic change," he said. "These are huge, huge shifts... This would really be an unprecedented rate and magnitude of change."

And that is just the point - 1.5 degrees is still possible, but only if the world goes through a staggering transformation.

An early draft (leaked and published by the website Climate Home News) suggests that future scenarios of a 1.5 deg C warming limit would require the massive deployment of technologies to remove carbon dioxide from the air and bury it below the ground. Such technologies do not exist at anything close to the scale that would be required.

It is not clear how scientists can best give the world's governments this message - or to what extent governments are up to hearing it.

An early leaked draft of the report said there was a "very high risk" that the world would warm more than 1.5 degrees. But a later draft, also leaked to Climate Home News, appeared to back off, instead saying that "there is no simple answer to the question of whether it is feasible to limit warming to 1.5 deg C... feasibility has multiple dimensions that need to be considered simultaneously and systematically."

None of this language is final. That's what this week in Incheon - intended to get the report ready for an official release next Monday (Oct 8) - is all about.

"I think many people would be happy if we were further along than we are," the IPCC's Lynn said this week in Incheon. "But in all the approval sessions that I've seen - I've seen five of them now - that has always been the case. It sort of gets there in the end."