Virtually none, however, suggest that previous predictions of future heatwaves, droughts, storms, floods or rising seas were overblown.

And so, as the world's nations huddle in South Korea to validate the first major UN assessment of climate science in five years, one might ask: Have we underestimated the threat of global warming?

The Intergovernmental Panel on Climate Change (IPCC) report on capping the rise in Earth's surface temperature at 1.5 deg C above pre-industrial levels has not been finalised, with delegates predicting the five-day meet - due to end on Friday (Oct 5) - will go deep into overtime.

But a new draft of the 28-page summary for policymakers, obtained by Agence France-Presse, makes it alarmingly clear that the 2 deg C ceiling long seen as the guardrail for a climate-safe world is no longer viable.

With only 1 deg C of warming so far, the planet is reeling from a crescendo of lethal and costly extreme weather events made worse by climate change.

"Things that scientists have been saying would happen further in the future are happening now," Ms Jennifer Morgan, executive director of Greenpeace International, told AFP. "We thought we had more time, but we don't."

The landmark 2015 Paris Climate Agreement enjoins its nearly 200 signatories to hold warming to "well below" 2 deg C - and 1.5 degrees if possible, an aspirational goal that gave rise to the IPCC report. 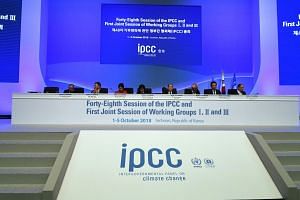 Many scientists point out that warnings of a climate-addled future date back decades.

The 1972 UN Conference on the Human Environment, for example, foresaw the possibility of "global and catastrophic effects" from a 2 deg C jump in temperatures caused by carbon dioxide emissions.

"Many scientists have long known that human-induced climate change could have dire consequences," said climatology professor Jean-Pascal van Ypersele of Universite Catholique de Louvain, who is a former IPCC vice-chair.

"Those who have underestimated the severity of climate change are mostly policymakers."

But Dr Wolfgang Cramer, research director at the Mediterranean Institute for Biodiversity and Ecology and a lead author of the IPCC report, disagreed.

"Scientists should be a bit more self-critical," he told AFP in Incheon. "Over the last 15-20 years, we have focused mostly on the impacts of a 2.5C, 3C and even 4C world."

Indeed, the vast majority of 200-odd climate models used to generate IPCC projections in its last major report, published in 2013, presumed a 2 deg C benchmark. Only a handful even considered a 1.5 deg C world.

And for good reason: Though loosely tethered to science, the 2 deg C target emerged mostly from the political turmoil of the 2009 Copenhagen UN climate summit, and set the research agenda for nearly a decade.

"Overly conservative, they failed to capture the full impacts of a warming planet on extreme weather events such as those that broke out across North America, Europe and Asia this summer," he told AFP.

The models also underestimated Arctic sea ice loss, along with the pace at which the ice sheets atop Greenland and West Antarctica - with enough frozen water to add 13m to sea levels - are disintegrating.

These "feedback effects", both a cause and an effect of global warming, are especially difficult for models to capture, Dr Mann noted.

Finally, science is inherently conservative, doubly so when it comes to the IPCC, whose credibility - constantly under fire - depends on never exaggerating the threat.

"There is a cultural tradition in science, especially climate science, to not want to be alarmist," said Dr Peter Frumhoff, director of science and policy at the Union of Concerned Scientists, a Washington-based research and advocacy group.

The 2013 IPCC report, for example, chose to not include in its sea-level projection the contribution of melting ice sheets, which have since emerged as the main driver.

"It was erring on the side of least drama," Dr Frumhoff told AFP.