PARIS (AFP) - An ambitious goal to limit global warming to 1.5 degrees Celsius is still within reach, said researchers Monday (Sept 18) who calculated humanity may have a larger allowable "budget" for burning carbon than previously thought.

While this amounted to rare "good news" in the generally doom-and-gloom domain of climate science, it was no cause for complacency, said the authors of a study in the journal Nature Geoscience.

Instead, it should revitalise efforts towards a target many had already abandoned as too onerous.

"All large emitters without exception will have to step up their efforts," said co-author Joeri Rogelj of the International Institute for Applied Systems Analysis in Austria.

Countries agreed in the Paris Agreement, adopted in 2015 after years of bickering, to limit average global warming to "well below" two degrees Celsius over pre-industrial levels.

They also committed to "pursuing efforts" for a more difficult 1.5 C target, for a better chance of avoiding global warming's worst effects. 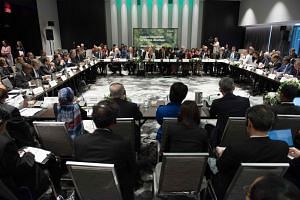 In a 2014 report, the UN's Intergovernmental Panel on Climate Change (IPCC), said the carbon concentration in the atmosphere should not exceed 450 parts per million (ppm) of CO2 equivalent (CO2eq) by 2100 for a "likely", 66-per cent, chance of 2 C.

According to the IPCC report, the concentration in 2011 was already 430 ppm CO2eq.

On the basis of the IPCC figures, a budget of 400 billion tonnes was calculated as the maximum amount of CO2 humanity can emit into the atmosphere from 2011 and still keep the 1.5 C goal in sight.

The new analysis, however, estimates the remaining budget from 2015 to be closer to 880 billion tonnes of CO2 - nearly four times bigger than the UN estimate, the research team said.

"This is good news but the pressure is not off," said Rogelj.

The findings, he added, "revived the objective of keeping maximum warming to 1.5 C - back from being a geophysical and socioeconomic implausibility to it being possible, yet still very challenging."

The team said they used the same "Earth System" simulation models employed by the IPCC for its projections, but also other modelling tools that enabled them to explore a greater variety of possible scenarios.

"Our study is based on a wider range of evidence than available at the time of the IPCC" report, said Rogelj.

The results showed that reaching "carbon neutrality" by mid-century would offer "a fair chance to keep global warming to a maximum 1.5 C," he added.

Carbon neutrality means removing as much carbon from the atmosphere as you put into it, in order to achieve a zero carbon footprint, or even a negative one.

"The literature shows that achieving carbon neutrality is technologically and economically possible, if we start with ambitious actions today," said Rogelj.

But it was clear that national carbon-cutting pledges submitted under the Paris Agreement, dubbed NDCs, "do not represent the kind of ambitious actions that are implied here," the researcher added.

Keeping within the budget would require a phase-out of traditional coal power in the next two decades, and investing in trees and technology that suck CO2 from the atmosphere.

The global electricity sector, said the study authors, would need to become carbon neutral, even carbon negative, by mid-century.

The planet has already heated up about 1.0 C, according to scientists.