LONDON (AFP) - Prime Minister David Cameron warned on Sunday (June 19) of a painful hit to Britain's economy if it quits the EU, as rival camps raced for the last votes in a referendum battle shaken by the shock murder of lawmaker Jo Cox.

Four days ahead of a ballot that could rewrite the political and economic destiny of Europe, the two sides resumed an emotional, often acrimonious scramble for public support as latest polls showed the Remain camp gaining ground.

If Britain leaves the EU, it would be the first nation to do so in the bloc's 60-year history. The prospect has raised fears for the future of the European project, born out of a determination to forge lasting peace after two world wars.

There will be no turning back if voters decide to pull out of the European Union on June 23, the British leader told a BBC television audience.

"I am absolutely convinced that our economy will suffer if we leave," Cameron said. Britain would lose its free trade access to the bloc, creating a hole in the budget to be plugged by tax rises or spending cuts, he predicted. 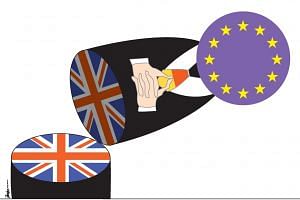 Brexit and the burden of being Germany 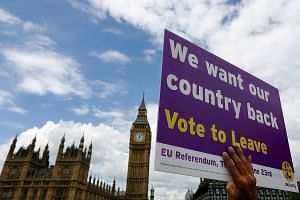 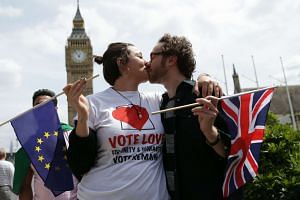 Cameron evoked the fighting spirit of wartime leader Winston Churchill to urge people not to give up on Europe.

A divorce from the EU would be "a one-off and permanent diminution in our standing in the world; an abject and self-imposed humiliation for a proud and important country like ours", he wrote earlier in the Daily Telegraph.

The tightly-fought campaign had paused for three days to mourn Cox, a 41-year-old mother-of-two and active Remain campaigner who was stabbed and shot in the northern English village of Birstall on Thursday (June 16).

It was the first murder of a sitting British member of parliament since 1990.

Her 52-year-old alleged killer, Thomas Mair, appeared in court on Saturday (June 18) and shouted: "Death to traitors, freedom for Britain". He was remanded in custody and is due to appear in court again on Monday. A psychiatric report has been requested.

Parishioners prayed for Cox at a Sunday church service nearby the murder scene.

"Her humanity was powerful and compelling and we would do well to recognise her as an amazing example: a 21st century Good Samaritan," Reverend Paul Knight told the congregation.

"We did have momentum until this terrible tragedy," he told ITV television.

The average of the last six polls, conducted between June 10 and Saturday, put the Remain and Leave camps level at 50-50, excluding undecided voters, according to the What UK Thinks website.

The Leave camp had been a few percentage points ahead in recent polling, but fresh surveys showing a rise in support for Remain brought the average back to neck-and-neck.

A Survation poll conducted on Friday and Saturday put Remain at 45 percent and Leave at 42 percent - the reverse of its previous findings on Thursday.

While the Remain camp has tried to focus on the potential economic damage that Brexit could inflict, the Leave campaign has held out the promise of Britain taking better control of mass immigration if it leaves the EU.

UK Independence Party leader Farage had to fend off criticism Sunday, however, over his release of a campaign poster showing refugees trudging through fields towards the camera with a bold, red headline "Breaking Point".

"The poster reflects the truth of what is going on," Farage told Sky News television, arguing that a row over the poster, released a few days earlier, might not have erupted if not for Cox's shooting.

The justice minister, Michael Gove, who supports Brexit, said: "When I saw that poster I shuddered. I thought it was the wrong thing to do." Britain's finance minister George Osborne said it was a "disgusting and vile poster" with echoes of 1930s literature.

Osborne cautioned that Britain would be "a lot poorer" outside the EU.

"You can't predict the enormous uncertainty that exiting the EU means for Britain," he told ITV television.

Osborne said he hoped Cox's death would lead to "a less divisive political debate in our country".

Remain campaigners sought publicity with a "kiss chain" in which they said hundreds of Europeans and Britons puckered up around London's Parliament Square, and in Rome, Paris and Berlin.

Meanwhile, Britain's Sunday newspapers picked sides in their final editions before the vote.

The Mail on Sunday and The Observer gave their support to the Remain camp, while The Sunday Times and The Sunday Telegraph broadsheets backed quitting the EU.

"Yes, we must be prepared for difficulties, but we should hold our nerve" in voting Leave," said the Sunday Times.