In another bizarre twist to the already strange story, the Daily Mail has an update on its earlier story of British baroness Michelle Mone, who carried up 46-year-old thinking he was a child.

The story, which was also picked up by various news sites like The Independent and The Daily Mirror, had reported that Baroness Mone had tweeted about a gaffe she committed after she gave a speech at an entrepreneurs conference in Vietnam.

In front of a crowd of 3,000 people, she accepted flowers presented to her by a "boy" and then picked him up to pose for a photo together. 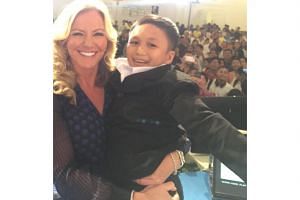 She had not realised that the "child" was actually a 46-year-old man whose wife was in the front row of the conference, it reported.

But on May 10, the Daily Mail website updated the original story to say the man is actually a 22-year-old real estate agent who is single.

Mr Nguyen Tan Phat said on his Facebook page on May 9 that he was the man pictured together with Baroness Mone, and wrote in Vietnamese that "he has never had a wife or lover".

He also posted a photo of his identity card, adding that the "year I was born is indicated on Facebook".

Baroness Mone was surprised by this new revelation. She shared an article on her Twitter account and added: "Friend just sent me this... wow!"

The article,from the American morning show Today website, quoted the baroness' spokesman Rory Grant as saying that the woman who claimed to be married to Mr Nguyen had said it "during a time of such fever pitch".

"It transpires the man is not married, so the lady must have been joking in any case."