WASHINGTON (WASHINGTON POST) - After three flat years that had hinted at a possible environmental breakthrough, carbon dioxide emissions from the use of energy rose again by 1.4 per cent in 2017, according to new data released by the International Energy Agency on Wednesday (March 22).

The increase in emissions of the all-important greenhouse gas came as global energy demand itself increased thanks to strong economic growth - and that demand was sated by all types of energy, including renewables but also oil, coal and natural gas.

"The growth in energy-related carbon dioxide emissions in 2017 is a strong warning for global efforts to combat climate change, and demonstrates that current efforts are insufficient to meet the objectives of the Paris Agreement," said the IEA.

Global coal demand increased 1 per cent last year, following two years of declines, the IEA found. Demand for oil and gas surged even more, at 1.6 per cent and 3 per cent, respectively.

All of this happened even though renewable energy also increased, affirming that the pace of change in the global energy sphere is not yet fast enough to reduce greenhouse gases, which have long been closely tied to economic and population growth.

The findings by the IEA matched a preliminary finding released late last year by a scientific group, the Global Carbon Project, which also reported that greenhouse gas emissions had risen in 2017 after three flat years.

The failure of emissions to rise between 2014 and 2016 had suggested to analysts that something may have finally changed in the global energy economy - a possible "decoupling" of emissions growth from steady economic growth, thanks to the proliferation of renewables and increasing energy efficiency. But now, that hopeful assumption is being called into question. 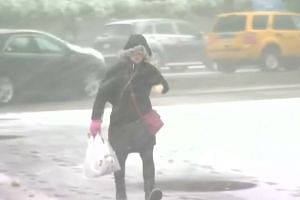 The IEA's findings will undoubtedly feed into an increasingly urgent international climate dialogue about how to strengthen countries' promises under the Paris climate agreement. A key meeting on this will occur this December in Katowice, Poland.

The IEA results came even as a somewhat more optimistic report emerged from three environmental organisations that closely monitor the global coal industry. Coal is the fossil fuel that has drawn the most ire from environmentalists simply because emissions from burning coal are higher than from burning oil or natural gas.

The new annual report from CoalSwarm, the Sierra Club and Greenpeace found that while the global fleet of coal plants grew by 2 per cent in 2017, a declining rate of construction of suggests the fleet as a whole could soon begin to shrink.

"With declining deployment and high levels of retirement, coal power capacity is now caught in a squeeze: if current trends continue, by 2022 yearly retirements will exceed new capacity and the global coal fleet will begin to shrink," said the report, whose lead author was Christine Shearer, a senior researcher for CoalSwarm.

That change, however, isn't happening fast enough to save the climate, found the report - in effect echoing the IEA's findings.

The group presented some stark numbers illustrating a declining pipeline for new coal plants, including the fact in the past two years, coal plant construction starts have declined by 73 per cent (they declined 29 per cent just for the year 2017). Newly completed plants also declined 28 per cent in 2017.

The coal industry responded quickly to the environmentalists' report on Wednesday. While it did not directly dispute the basic findings provided by CoalSwarm (which are provided by plant-watchers around the world), the industry presented a considerably more optimistic take, noting the groups' own numbers show that coal capacity is still increasing.

"As with large infrastructure projects, the journey from announcement to completion can be a complex process with various challenges - this helps to explain why some energy projects may not come to fruition including coal stations," World Coal Association CEO Benjamin Sporton said in an emailed statement.

"I've just returned from India and China, where coal will continue to act as the base load for the foreseeable future - in China and India coal provides more than 50% of the energy mix," Sporton continued.

"In the last five years as China became the largest solar and wind market in the world - it also added 229GW of coal power. Thus, increasing coal generation by a third. Renewables complement rather than displace coal - a trend that we continue to see across Asia."

Indeed, the environmental groups' report finds that a net number of new coal plants were added in 2017, including 34 gigawatts of total capacity in China, 9 gigawatts in India, and 18 gigawatts in the rest of the world.

But CoalSwarm and its fellow environmental groups nonetheless predict worse days ahead for the industry. "We would argue, all indicators suggest it's going to begin to contract," said Shearer, who led the report. "Which really goes against a lot of the forecasts that the coal fleet is going to continue growing for decades." Most significant, the new report charges that there is still too much coal for the climate to handle, and change isn't happening fast enough.

The report finds that if one combines the implied emissions from the currently operating coal plants over their lifetimes with emissions from those under construction now and from just a fraction of those that are currently proposed, the emissions would more than eat up coal's share of of the so-called "carbon budget" for holding the planet's warming below 2 degrees Celsius.

"What makes all of this so alarming is that we have such a short amount of time to turn all this around," said Shearer. "So while the trend is going against coal, it's still not happening fast enough for international climate goals, or for a liveable climate."

So in sum, the two reports agree on something very fundamental - coal is struggling, perhaps, but is not out of the picture. And whatever change is happening, it isn't enough to put the planet on the course that world leaders have said they want - one that avoids the worst impacts of climate change.