The heaviest man alive has left his home in Mexico for the first time in six years to seek medical treatment for his weight, local media reported.

Mr Juan Pedro Franco Salas, 32, is from the city of Aguascalientes in Mexico and weighs 500kg. He was taken by special ambulance to a private hospital in Guadalajara, in the neighbouring state of Jalisco.

Mr Salas's mother, Mrs María de Jesús Salas Lemus, told Mexican newspaper Excelsior that Mr Salas was only 3.4kg when he was born, but inexplicably gained weight rapidly and weighed 230kg by the time he was 17. His condition worsened after an accident forced him onto bed rest, where he has been confined for the past six years.

According to Mexican news outlet Televisa, Mr Salas suffers from morbid obesity, diabetes and hyperthyroidism, among other health conditions.

He was said to be in good spirits as he left his house and hoped to get back on his feet soon - he wants to be able to walk and run again. 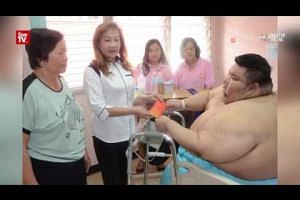 Mr Salas will receive a health check-up for his blood, heart and respiratory system. His goal is to lose 30kg to 40kg in order to be fit for surgery.

Televisa quoted Dr José Antonio Castañeda, the surgeon who is heading the medical team, as saying that Mr Salas must lose as much weight as possible in the next six months.