MEXICO CITY (WASHINGTON POST) - Mexicans hit the polls Sunday (July 1) to elect a president for a single six-year term and 628 members of the national congress, who for the first time in nearly a century can be reelected.

They're also choosing nine governors, some 1,600 mayors and thousands of state and local lawmakers.

Opinion polls underscore voters' deep irritation with things as they are. Mexicans stand ready to clobber the three parties of the political right, centre and left that have governed through the country's three-decade transition from autocratic rule to fitful democracy.

The surveys give Andrés Manuel López Obrador, 64, a pugnacious leftist nationalist making a third bid for the presidency, a seemingly insurmountable lead over three rivals. Some suggest his National Regeneration Movement, or Morena, which he founded just four years ago, could even win a congressional majority.

Here's what you need to know.

WHAT HAS FOLKS SO RILED UP?

Mexicans have plenty reason to fret.

Corruption is rampant and the justice system woefully inept. Successive governments have proved unable to end the criminal hyper-violence that in a dozen years has killed more than 150,000 people and left tens of thousands more missing.

After decades of export-focused industrialization, about half of Mexicans remain poor. And President Donald Trump has repeatedly threatened to scrap the North American Free Trade Agreement, or Nafta, which has fuelled that manufacturing boom. 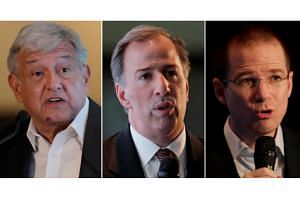 It's all led to a pitchfork moment for Mexico's political class - regardless of ideological stripe - and for their allies in the moneyed elite.

Universally known by his initials, AMLO, López Obrador has made zero tolerance for corruption the cornerstone of this year's campaign.

Muffling a more fervent leftist agenda of the past, AMLO argues that ending corruption alone will solve glaring inequality and unleash greater prosperity.

Rather than vowing a witch hunt to ferret out corrupt officials, he suggests that his personal honesty will filter through Mexico's huge public sector, like bleach applied to a stain.

That has drawn a lot of skeptics, of course. And AMLO's rivals have fielded anti-corruption promises of their own. But they are saddled with political parties seen by many as more the problem than the solution.

Ricardo Anaya, 39, of the coalition led by the conservative National Action Party and leftist Party of the Democratic Revolution, or PRD, faces accusations of corruption involving a real estate deal. Members of both parties, including several governors, recently have been ensnared in scandals as well.

Anaya has denied the accusations against him.

José Antonio Meade, 49, the Yale-trained economist and experienced government minister who is the candidate of the ruling Institutional Revolutionary Party, or PRI, enjoys a reputation of personal honesty and competence.

But the PRI has suffered from scandals of the past four years involving President Enrique Peña Nieto's family, several top aides and some dozen governors.

The Peña Nieto administration also is widely reviled for its failure to properly investigate the September 2014 disappearance and all but likely murder of 43 students from a teachers college, in a case involving local police allied with a crime gang. The government's strategy for taking on the criminal gangs has also proved a failure, with murders expected to hit records this year.

Independent candidate Jaime Rodríguez Calderón, 60, a longtime PRI politician-turned-populist governor of northern Nuevo Leon state, met widespread derision this spring when he called in a televised debate for cutting off the right hand of any official found to be corrupt. His polling support has held steady at around 3 per cent.

Should he win, López Obrador's ability to push his programs - which to many analysts remain undefined - will largely depend on his coalition's support in the congress, but also in state houses and city halls. Polls suggest that his coalition will win a large plurality of congressional seats, if not an outright majority.

Whoever prevails Sunday faces at least 2 ½ years of dealing with Trump, who has kept up the harsh criticism of Mexico and of Mexicans that helped him win his 2016 election. Trump has demanded a rewritten Nafta, and the stalled negotiations may wind up on the next president's plate.

Both Anaya and Meade support both Nafta, under which 80 per cent of Mexico's exports go to the United States, and the market-friendly economic policies that have been built around it.

While he's said he supports the trade agreement, AMLO has said Mexico would do fine without it. He's called for substituting imports of US agricultural and energy products with Mexican goods.

His advisers say López Obrador wants to woo private investment to replace government spending. But he also has called for reviewing recent contracts given to Mexican and foreign companies for energy production and public works, including the US$9 billion (S$12.3 billion) international airport being built outside Mexico City.

With Trump deeply unpopular in Mexico, all four presidential contenders have vowed to stand up to him. But López Obrador, like Trump, is known for particular toughness with opponents. And analysts say his more nationalist world view was forged by the Mexican political class's historic distrust of US intentions.

A more defiant approach to Trump might disrupt binational cooperation on trade, crime enforcement, immigration, border security and the environment. Diplomats say those ties so far have endured despite the public spats of the past 18 months.

The next president will have to confront rampant political violence in much of the country, where personal rivalries or criminal attempts to control governments have led to murderous attacks on officials and political candidates alike.

More than 130 people have been killed in 550 such attacks since last September, the consultancy Etellekt reports. The bulk of the violence has been aimed at municipal office holders and candidates.